Born in Ambala in the northern state of Haryana, Om Puri was the youngest of seven children of an army officer and his wife; three of his siblings died at a young age. At first, he thought of following his father's footsteps and joining the army. But while doing amateur theatricals as a student at Khalsa College, he caught the eye of the prominent Punjabi playwright Harpal Tiwana, who invited him to join his semi-professional theater company, Punjab Kala Manch. Later, he joined National School of Drama in Delhi, alongside his classmate Naseeruddin Shah, who would also follow Puri to the Film and Television Institute of India in Pune and eventually worked with him in many films.

Not just arthouse cinema, Om Puri also worked in mainstream films and got his major breakthrough with tough drama Ardh Satya (1983). He would often joke, "Art cinema gave me my bread but the butter, jam and Scotch came from commercial cinema!"

On Om Puri's 68th birth anniversary today, let us take a walk down the memory lane-

He Wasn't A Major Movie Buff

His former wife Nandita revealed in his biography titled 'Unlikely Hero: Om Puri', "Om is not a major accumulator or collector. Indeed, he has quite basic needs and wants. Ironically, he is not a major film buff either. Having had an overdose of films at the FTII and various film festivals earlier on, he can survive without visiting a theatre for years together. And apart from a few, he rarely watches his own films."

In the book, she wrote, "He was first fascinated by cooking while watching his mother prepare those rare delights of his childhood. Later as a Boy Scout and living on his own since a very young age, he could rustle up a meal at short notice.

After a long day's shoot, Om comes and peeps into the kitchen. Even chopping vegetables over a couple of drinks is relaxing for him.

Narrating a funny incident, she added, Om loves to call friends home and cook for them. And during his shoots abroad, his favourite pastime is to cook a meal for his co-stars and unit members. Though his favourite cuisines are Thai and Mexican, he cooks the Indian fare, like pulaos, parathas and alu-palak raita, among other dishes, quite well.

One evening, he was cooking for Roland Joffe at his Bel Air residence that overlooked the entire Beverly Hills. When Om was kneading the dough for rotis (or chapatis), he realized there was no belan or rolling pin to roll the rotis with. He immediately took an empty wine bottle as his belan and sitting in BelAir we had home-made fluffy rotis with delicious Indian curry."

Nandita recalled, "During the initial years of our marriage, Om was wary about parting with his money. He would never give me a monthly allowance for household expenditure and preferred to pay the bills personally.

He would be away for months and the milkman or grocer would be knocking for their dues, every time to be told, ‘Saab is away.'

Once when I complained to a friend, Om's simple logic was, ‘What if she runs away with my money?' It was only after a couple of years that Om loosened his purse strings and tightened his trust towards me."

"he still hates clubbing and late night parties. Any invite that says ‘9 p.m. onwards' is relegated to the bin," she further wrote in the book. 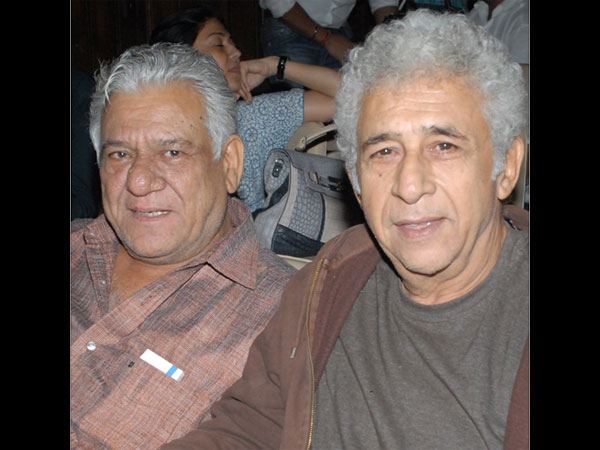