Dussehra or Vijay Dashami marks the end of both, Durga Puja and the nine-day long Navratri festival. The day symbolises the victory of good over evil when Goddess Durga killed Mahishasura, the demon king. In the northern, western and central states of India, the day is celebrated as Lord Ram's victory over Raavan.

The troupe of Dussehra has been used in many Bollywood films to depict the triumph of good over evil. In some films, the festival has worked as a device to take the narrative forward. We bring you a list of few films which brought the festival of Dussehra to life on the big screen.

In one of the most breathtaking sequences in this Abhishek Varman film, we see an effigy of Raavan burning in the backdrop when Roop (Alia Bhatt) and Zafar (Varun Dhawan) meet for the first time at Hira Mandi. At this crucial point, the audience is left wondering whether Zafar is Ram or Raavan to Roop's Sita.

The final face-off between Raghu (Sidharth Malhotra) and the pint-sized villain Vishnu (Riteish Deshmukh) ensues during Dussehra in this film set against the backdrop of Ram and Raavan. No points for guessing who wins this battle!

Vidya Balan's Kahaani has one of the most arousing depictions of the victory of good over the evil in the film's climax. After seeking her revenge from her husband's killer, Vidya Balan's character Vidya Bagchi is seen mingling with a crowd of ladies who are celebrating Sindoor Khela. The film ends with a scene of the Durga idol being immersed symbolising that the Goddess is now retreating to her abode after vanquishing the evil.

The 'Tu Chahiye' song in this Salman Khan film had the superstar and his leading lady Kareena Kapoor Khan prepping with the kids for Raavan dahan.

Filmmaker Anubhav Sinha's modern day retelling of Ramayana with a sci-fi twist features the main antagonist Ra.One (Arjun Rampal) watching an effigy of Raavan burning during Dussehra celebrations. The scene in the film established the evilness of Ra.One after his video game character comes to life.

The theme of Ramlila and Dussehra played an important role in this Abhishek Bachchan starrer which revolves around identifying the fear, the good and the evil which resides within human beings. The characters in the film are seen going to see the theatrical depiction of Ramlila in one of the scenes.

In one of the scenes in the film, freedom fighter Chandrashekhar Azad (played by Aamir Khan's character TJ) gets trapped by the British police officers during Dussehra celebrations. However, he manages them to give them a slip when a burning effigy of Raavan comes crashing down.

Ram (Ranveer Singh) and Leela (Deepika Padukone) shoot each other amid the Ramlila celebrations. As the lovers fall down to their death, we see the effigy of Raavan burning. The scene signifies Ram and Leela's sacrifice to end the enmity between their warring clans.

The film features a sequence in which Akshay Kumar's character Vikram Singh Rathore gets stabbed by one of the villains who is hidden inside the effigy of Raavan during Dussehra celebrations.

The climax scene of this film set against the backdrop of Dussehra celebrations), has Kajri (Madhuri Dixit) seeking revenge from one of her wrongdoers Roop Sahai (Govind Namdev). She ties him to the towering effigy of Raavan and sets him on fire. The scene symbolizes the victory of 'dharma' over 'adharma'. 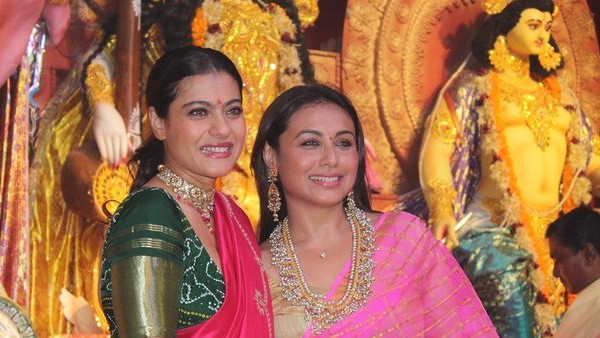 ALSO READ: Rani Mukerji Reveals What She Misses The Most About Durga Puja Celebrations This Year Amid Pandemic