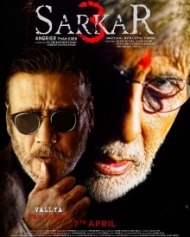 In Sarkar 3, Yami Gautam plays the role of Annu Karkare, who is on mission  to take revenge on 'Sarkar' for killing her father.

The movie will have Jackie shroff as the main antagonist.

The movie is all set to hit the big screens on April 7.