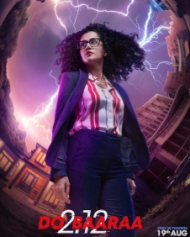 Dobaaraa is a 2022 Bollywood drama movie, directed by Anurag Kashyap. The movie stars Taapsee Pannu and Pavail Gulati in the lead roles. The movie has its screenplay penned by Nihit Bhave.

The movie depicts the story of a woman, who tries to save the life of a boy who witnessed a death during a thunderstorm.

Set in Pune, Dobaaraa begins with Antara Bhatt (Taapsee Pannu), a local nurse moving into a new house with her husband and her daughter. She soon learns that her abode was previously inhabited by a 12-year-old boy Anay who was run over by a heavy vehicle after he witnessed an unfortunate event during a thunderstorm twenty-six years ago.
Cut to present, Antara finds a television in her new house on the night of a similar storm. When she switches it on, she finds Anay on screen. Antara begins to communicate with him. Antara, who learnt about Anay's death from a friend, tries to stop him from falling into a mishap.

But little does Antara know that her 'tweaking' of the past events have triggered a chain of events which will push her down the rabbit role and make her question her sanity!