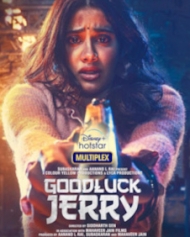 Set in Punjab, Jaya Kumari AKA Jerry (Janhvi Kapoor), a Bihari girl works as a masseuse while her widowed mother Sharbati (Mita Vashisht) sells momos for a living. Ah, veg momos to be specific! Their meagre existence gets a jolt when Sharbati is diagnosed with stage 2 lung cancer.

In dire need of money to cover the expenses of her mother's treatment and chemotherapy sessions, Jerry chooses to work as a drug mule for a smuggling gang; unbeknownst to her family. Things take a dark turn when Jerry decides to quit the dirty business. Soon, she finds herself treading a dangerous path where the lives of her loved ones are at stake.