It's the season of joy and many Bollywood celebs are celebrating this Christmas with their dear ones. The Kapoor khandaan hosted its annual Christmas brunch at the late actor Shashi Kapoor's house and in attendance were Kareena Kapoor and family, Karishma Kapoor and her kids, Rishi Kapoor and Randhir Kapoor. On the other side of town, director Zoya Akhtar hosted a Christmas party which was attended by Deepika-Ranveer, Karan Johar and Katrina Kaif. Check out the pictures!

The Nawabs At Kapoor Christmas Brunch

Kareena Kapoor Khan, Saif Ali Khan and Taimur attended the annual Kapoor's Christmas brunch this afternoon. Saif and Taimur were twinning in blue. Taimur wore a denim on denim outfit with while his dad Saif looked cool in a blue kurta and white pyjama. Kareena Kapoor looked classy in a white shirt and black leggings.

Actor Rishi Kapoor turned up for the brunch in full on Christmas avatar. He wore a red Christmas sweater with a Christmas hat and looked jovial on the day.

Randhir Kapoor also came for the family get - together giving out Christmas vibes. He twinned with his brother in a red t-shirt and a Christmas hat.

Newlyweds Deepika Padukone and Ranveer Singh attended another Christmas get together held on the other side of town. Deep-veer turned up at director Zoya Akhtar's Christmas party wearing the colours of Christmas. Ranveer was dressed in a white hoodie whereas Deepika looked glamorous in a red dress which she accessorized with golden hoop earrings. Ranveer's suave sunglasses stole the show as they have been doing for some time now.

Katrina Kaif attended Zoya Akhtar's Christmas bash looking very pretty in a white floral dress. Her fans were taking pictures of her as she walked into Zoya's house.

Karan Wearing The Spirit Of Christmas

Karan Johar also made it to Zoya Akhtar's Christmas bash. He looked cool in a black t-shirt over which he wore a graphic black and white shirt. He too sported the Christmas colour by wearing red pants. Again, stealing the show was a pair of sunglasses. His was totally cool! 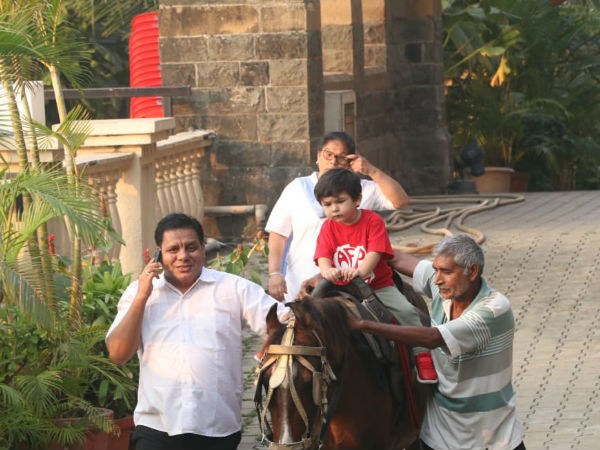