After tying the knot in two grand ceremonies at Jodhpur's Umaid Bhavan Palace, Priyanka Chopra and Nick Jonas hosted their first wedding reception at Durbar Hall at Taj Palace Hotel in New Delhi. Earlier, the couple had exchanged wedding vows in a Christian ceremony which was officiated by Nick's father. Later, they tied the knot again as per Indian traditions.

Speaking about their wedding reception last night, Indian Prime Minister Narendra Modi graced the function and had a gift for the couple. Scroll down to read more-

PM Modi Gifted This To The Newlyweds

Later, Modi was seen sharing a laugh with the newlyweds and their family inside the reception venue.

According to DNA, after striking a pose for the shutterbugs, Priyanka smiled and told reporters, "Ab aapko family se milate hai." Soon, the couple's families joined them on stage and posed for the cameras. 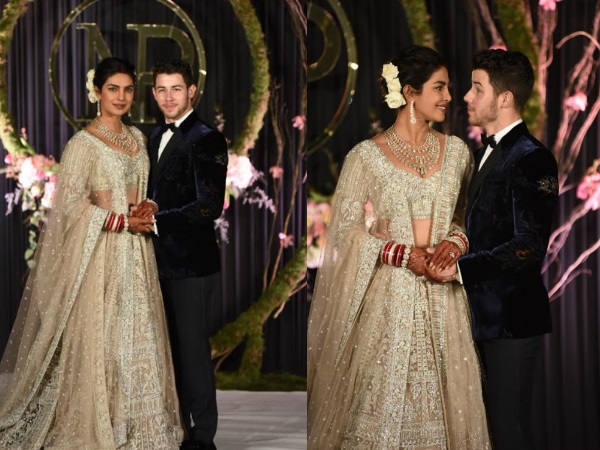 First Pics From Priyanka Chopra- Nick Jonas' Delhi Reception Are Out & We Are In Love With Them!