Deepika Padukone and Ranveer Singh were spotted out and about in Mumbai city after a long time. DeepVeer headed to a popular club in Juhu. Birthday girl Amrita Arora rang in her 41st birthday with friends and family at the same club. Malaika Arora, Farah Khan and others attended. We also spotted Karan Johar at the club on Thursday night. Khushi Kapoor was snapped in a casual attire. Check out all their photos.

Deepika Padukone and Ranveer Singh were out and about in Mumbai city on Thursday night. Our paps snapped them at a popular club in Juhu. Ranveer couldn't stop gushing over Deepika as he kissed her on the cheeks. Dressed in a black t-shirt, denims, and white sneakers, Deepika looked too pretty. Ranveer on the other hand, was in his usual quirky avatar, wearing a blue and red sweatshirt with white sweatpants and a snazzy pair of sneakers.

Amrita Arora turned 41 on Thursday and the birthday girl headed out to party with her friends and family at the club. Amrita made heads turn in a dark golden shimmery gown. She looked absolutely stunning.

Amrita's sister Malaika Arora made it to Amrita's birthday bash at the club. She looked drop dead gorgeous in a blue floral printed dress with ruffle detailing. She had on a floral printed white jacket over it.

Farah Khan also made it to Amrita Arora's birthday party on Thursday night. Farah dressed in a long white tunic, denims, and had on a black scarf around her neck.

Karan Johar was also snapped at the same club on Thursday night. He too was dressed quirky wearing a floral jacket with black pants and black sneakers. Karan is known for his love for fashion and high street designer brands.

Khushi Kapoor Heads Back After The Club

Khushi Kapoor was snapped by the paparazzi as she was heading back after the club. Khushi donned a casual attire, wearing a black top, high waist denims, and white sneakers. 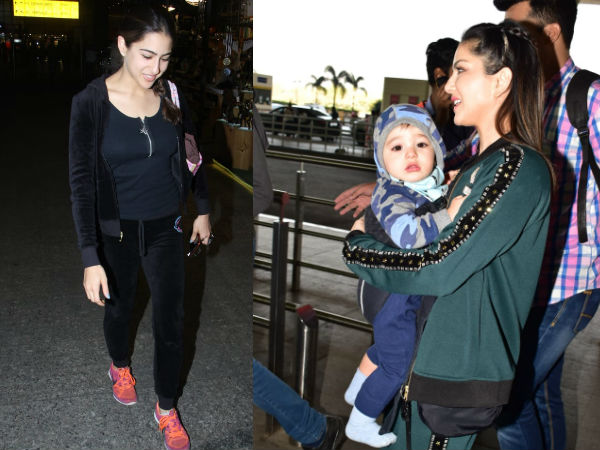 MOST READ: Sara Ali Khan Spotted At The Airport; Sunny Leone Travels With Her Adorable Babies