The makers of 'Housefull 4' are making sure that we don't have a dull day by dropping character posters from the film, one after the other. After unveiling Akshay Kumar, Riteish Deshmukh, Bobby Deol, Kriti Sanon and Pooja Hegde's intriguing character posters, they have now released Kriti Kharbanda's first look from the comic-caper.

The first poster features Kriti looking radiant in a red traditional outfit and happily striking a pose. We must say, we just can't take our eyes off her.

In the next poster, Kriti as the 15th-century princess Meena is seen holding a knife to the neck of her millennial avatar.

In her tweet, Kriti thanked the 'Housefull 4' makers and wrote, "A big thank u #SajidNadiadwala @NGEMovies #kwan @CastingChhabra @farhad_samji! This wouldn't have been possible without your support! Big love! ❤️." (sic)

Talking about 'Housefull 4', Kriti was earlier quoted as saying by the Indian Express, "Kriti (Sanon), Pooja and I play sisters. I learnt sword fighting for my role." 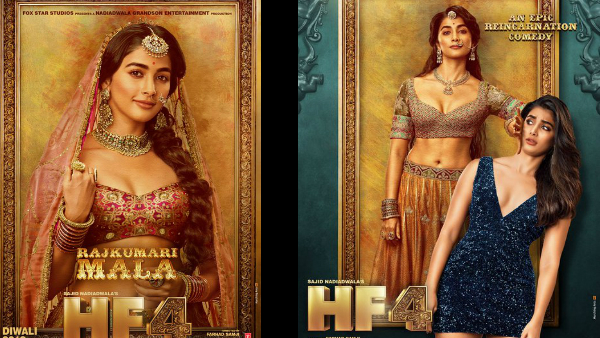