Hrithik Roshan and Tiger Shroff, two of the biggest action heroes of our generation, are pitted against each other for a massive showdown in Siddharth Anand's 'War'. The action-entertainer will see the two superstars going after each other as they pull off jaw-dropping, death-defying stunts in a bid to win over each other. One such deadly bike chase sequence will see Tiger and Hrithik crash through glass window panes!

Revealing details about it, director Siddharth Anand was quoted as saying, "This was an incredibly high-risk scene as my actors could have got severely injured had any one single detail not worked perfectly. It's a high-speed bike chase scene that will see Hrithik riding a super bike and Tiger chasing him on foot."

He further said, "It needed Tiger to showcase his parkour prowess to time his jump perfectly so that he crashes into Hrithik and both of them break through glass window panes! On top of that, we conceptualised this beat at a blind spot, a juncture where two lanes meet so both Hrithik and Tiger couldn't time their movement by looking at each other!"

Adding more details about it, he added, "Though all safety precautions were in place, the scene definitely needed their focus, their razor-sharp instinct and their trust in each other as actors to pull it off. We were all praying that everything goes as per plan. Hrithik and Tiger have incredible camaraderie and faith in each other and people will see that when they watch this film. They are two of the biggest action heroes of India and there is a reason why they are loved so much because they put their body on the line to entertain audiences. I'm thankful to them for pulling off these risky stunts that has made WAR such a visual spectacle."

Produced by Yash Raj Films, the high-octane film that also stars Vaani Kapoor opposite Hrithik Roshan, is set to release in Hindi, Tamil and Telugu on the big National Holiday of Gandhi Jayanti, October 2. 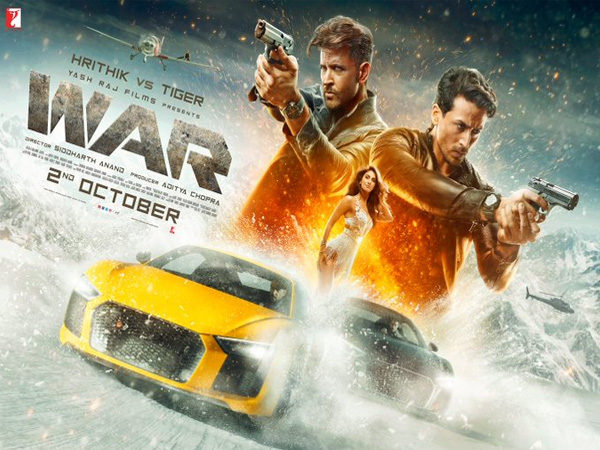 War First Poster: Hrithik Roshan Or Tiger Shroff; Whose Side Would You Pick?