Jacqueline Fernandez looked very beautiful when she was snapped at a café on Monday afternoon. Sanjay Dutt was spotted at Vishesh Films office on Monday. Taimur Ali Khan looked adorable when he was snapped by the paparazzi. Kartik Aaryan was snapped at a talent management office in Mumbai. Alia Bhatt was snapped after a meeting at Sanjay Leela Bhansali's office. Check out the pictures of these celebs!

Jacqueline Fernandez was a beautiful sight when she was snapped at a café on Monday afternoon. Jacqueline donned a quirky outfit, wearing a white graphic t-shirt with a beige colored midi skirt. She had tied her hair up in a bun and she sported metallic blush pink pumps with her outfit. On the work front, Jacqueline will next be seen in the film Drive, which is a Hindi remake of an American movie with the same name.

Sanjay Dutt Spotted After A Meeting

Sanjay Dutt was spotted outside the Vishesh Films' office on Monday afternoon. He looked cool in a black t-shirt teamed with denims. Sanjay will be seen in Karan Johar's production Kalank, which has a huge star cast of Madhuri Dixit, Alia Bhatt, Sonakshi Sinha, Aditya Roy Kapur and Varun Dhawan.

Taimur Ali Khan looked so cute when he was snapped by the paps on Monday. He was sporting a printed red shirt with denims, and a pair of red crocs. Little Tim Tim has been flaunting a new hairdo with spikes off late, and he looks absolutely adorable in it.

Kartik Aaryan was snapped at a talent management office in Mumbai on Monday evening. He looked cool in a white graphic t-shirt with a light pink metallic jacket and denims. He wore a pair of dark grey sneakers to go with the outfit. Kartik has been reveling in the success of his last movie, Luka Chuppi, in which he starred opposite Kriti Sanon.

Alia Bhatt was snapped outside the office of ace director Sanjay Leela Bhansali, on Monday evening. She was sporting an all black outfit and looked very pretty in it. Is Alia signing up for a film with the director that everyone wants to work with? Guess we'll just have to wait to find out. Meanwhile, she is all geared up for the big release of Karan Johar's production, Kalank. 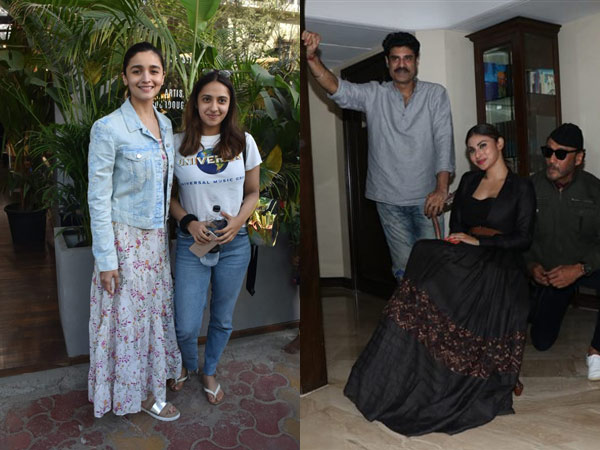 MOST READ: Alia Bhatt Goes Out For Lunch With A Friend; Cast Of Romeo Akbar Walter Promote The Movie