Janhvi Kapoor is one of those celebrities who is conscious about fitness and is often seen going to the gym. On Thursday afternoon, Janhvi was snapped heading to her gym like a total diva. Mira Rajput went out shopping with a friend on Thursday, and smiled for the cameras when she was snapped. Shraddha Kapoor looked cool in a co-ordinated outfit when she was spotted at the airport. Jim Sarbh was spotted outside a popular club. Check out these celebs pictures!

Janhvi Looks Like A Diva When Stepping Into Gym

Janhvi Kapoor is known for the different fashionista avatars she appears in and she makes even hitting the gym look stylish. On Thursday, Janhvi stepped into her gym looking like a total diva in a camouflage t-shirt which read social anxiety, and teamed it with grey gym shorts. On the work front, Janhvi will next be seen in Karan Johar's Kalank which just released its first look today. She is also prepping for the role of Gunjan Saxena, an IAF combat pilot, for a biopic on the latter.

Mira Rajput Spotted At A Store

Mira Rajput went shopping with a friend on Thursday and was snapped by the paps at the store. Mira smiled for the cameras looking stylish in a white top and high waist denims, with her hair tied up in a sleek ponytail. She sported a snazzy pair of sunglasses and carried a white handbag.

Shraddha Kapoor Snapped At The Airport

At the airport today, Shraddha Kapoor looked cool in a coordinated outfit. She wore a gleaming pastel green button down shirt with matching pants. Shraddha Kapoor has been busy filming for Remo D'Souza's dance film, Street Dancer 3, in which she will be starring opposite Varun Dhawan. The shooting schedule of the movie had first taken her to Amritsar, and later London.

Jim Sarbh of the Padmaavat fame was spotted outside a popular club in Juhu on Thursday. He made a dashing appearance, dressed in a summery navy blue shirt teamed with ripped denims and a pair of black converse sneakers. Jim Sarbh will be seen in Zoya Akhtar's web series Made In Heaven, which will premiere tomorrow, March 8th. 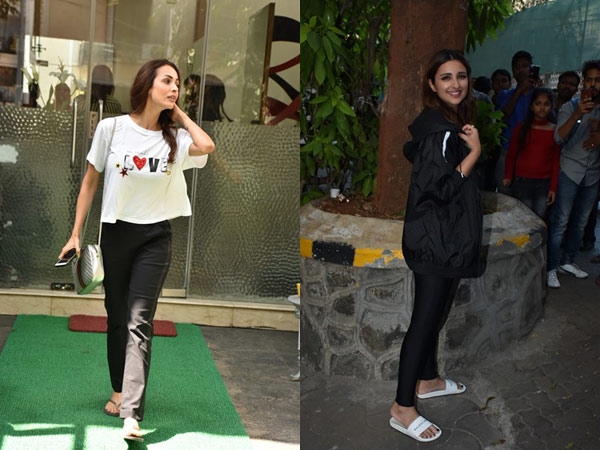