Kangana Ranaut was an elegant sight at the airport on Sunday morning when she returned after a meditation program. Kriti Sanon was snapped during an ad shoot in the city. Shilpa Shetty and her family went out for a weekend lunch on Sunday afternoon. Gully Boy star Siddhant Chaturvedi too was snapped at the airport. Rhea Chakraborty sported an all denim look when she was snapped by the paparazzi. See pictures of these celebs!

Kangana Looks Elegant At The Airport

Kangana Ranaut looked very elegant at the airport in a white salwar dress which she teamed with a floral printed dupatta. Kangana returned to Mumbai city after taking up silence for ten days at a meditation program. She had earlier said that she was gifting herself this meditation program for her birthday which is on March 23rd. On the work front, Kangana will next be seen in Mental Hai Kya, which also stars Rajkummar Rao, Amyra Dastur, Amrita Puri and Jimmy Shergill.

Kriti Sanon was shooting for an ad in Mumbai city when she was snapped by the paparazzi. Kriti was sporting a casual look in a brown sweater and ripped denims. She wore converse sneakers to go with her look. Kriti has been enjoying the success of her last film Luka Chuppi, in which she starred opposite Kartik Aaryan.

Shilpa Shetty Went Out For Lunch With Her Family

Shilpa Shetty was snapped post lunch with her family on Sunday afternoon. She was accompanied by her sister Shamita Shetty, her husband Raj Kundra, and her little boy Viaan Raj Kundra. Shilpa looked breezy in a white shirt teamed with a pink high low skirt, and a pair of red stilettos.

Gully Boy actor Siddhant Chaturvedi was snapped at the airport on Sunday afternoon. He looked cool in a casual avatar, sporting a green and white stripped t-shirt with denims and a pair of sneakers. Siddhant was accidently discovered by Zoya Akhtar, who cast him in Gully Boy as the cool, MC Sher. He blew everyone with his performance and made a fantastic entry into Bollywood.

Rhea Chakraborty sported an all denim look when she was spotted post lunch at a popular restaurant in Mumbai city. Rhea was wearing a denim crop top with high rise ripped jeans. 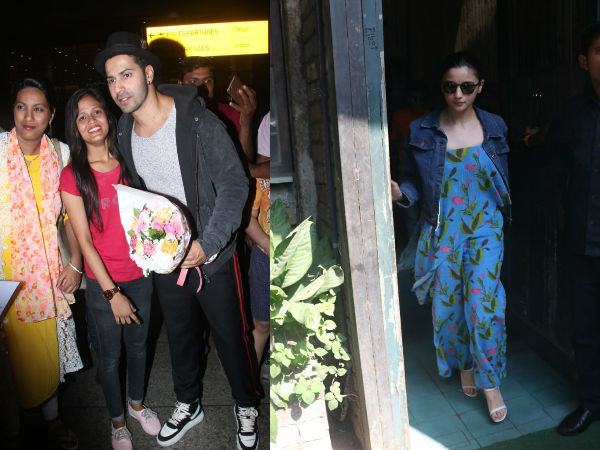 MOST READ: Varun Dhawan Receives Flowers From A Fan At Airport; Alia Bhatt Goes Out For Sunday Lunch