Kangana Ranaut was snapped by the paparazzi on Thursday afternoon, and she looked pretty in a black dress. Jacqueline Fernandez was spotted by the paps in the city on Thursday, and she made for a radiant sight in white. Gauri Khan stepped out in a casual avatar and she too got papped in the city. Arjun Rampal and his girlfriend Gabriella Demetriades played Holi and were drenched in colors when the paps snapped them. Check out the pictures of these celebrities.

Kangana Looks Pretty In A No Make Up Look

Kangana Ranaut just returned to the city after attending a long meditation program. On Thursday afternoon, she was spotted looking pretty in a black salwar kameez, with a no make up look. Kangana will next be seen in the movie Mental Hai Kya, which also stars Rajkummar Rao, Amyra Dastur, Jimmy Shergill and others.

Jacqueline Fernandez Gets Papped In The City

Jacqueline Fernandez looked radiant in an off white embroidered churidar when she got papped in the city on Thursday afternoon. It looks like Jacqueline was headed to a Holi party. On the work front, Jacqueline will next be seen in the film Drive, which is a Bollywood remake of an American movie with the same name.

Gauri Khan stepped out in a casual avatar on Thursday and she too got snapped by the paparazzi in the city. Gauri was wearing a black zip up hoodie with matching sweatpants, and a pair of sneakers. It looks like Gauri was coming back from a work out session at the gym.

It is the festival of colors today and we saw many Bollywood stars celebrating Holi. Our paps spotted the hunk Arjun Rampal with his gorgeous girlfriend Gabriella Demetriades after they attended a Holi party and played with colors. 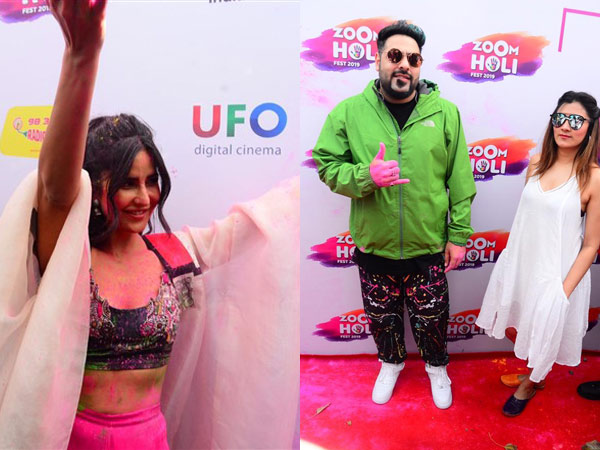 MOST READ: Katrina Kaif, Badshah & Others Have A Blast At Zoom Holi Fest: Pictures!