Kareena Kapoor Khan and Karishma Kapoor were enjoying a sisters' day out when they were snapped by the paparazzi. Kriti Sanon and Luka Chuppi's director Laxman Utekar visited a cinema hall to watch audiences' reaction to the movie. Abhishek Bachchan, Shweta Nanda Bachchan and Amitabh Bachchan were snapped together on Saturday night. Amrita Arora went out for lunch with her Shakeel Ladak. Sohail Khan looked like a hunk when he was spotted at the airport. Father-daughter duo Ananya Pandey and Chunky Pandey went out for lunch on Saturday afternoon. See the pictures of these celebs!

Looking fabulous on a sisters' day out, Kareena Kapoor Khan and Karishma Kapoor were snapped by the paparazzi on Saturday afternoon. Kareena was looking glamorous in an animal printed top with black harlem pants and black combat shoes. Karishma was casual in an all black avatar. The sisters struck stylish poses for the cameras when they were snapped.

Kriti Sanon and director Laxman Utekar visited a cinema hall in Juhu to see audience's reaction to their movie Luka Chuppi. Kriti has starred opposite Kartik Aaryan in the movie. She looked beautiful even in a casual avatar, wearing a black zip up hoodie, with black tights and black sneakers, whereas Laxman wore a light grey sweatshirt with denims and a hat.

The Bachchans Snapped On Saturday Night

Abhishek Bachchan, Amitabh Bachchan and Shweta Nanda Bachchan went out for a family dinner on Saturday night. Abhishek was behind the wheels in the car when they were snapped. Abhishek was looking casual in a white hoodie whereas Shweta was wearing a black graphic t-shirt, and Amitabh Bachchan twinned with Abhishek in a black jacket.

Amrita's Lunch Date With Her Hubby

Amrita Arora and her hubby Shakeel Ladak headed out for lunch on Sunday afternoon. They both twinned in white. Amrita looked pretty in an off shoulder white ruffled dress with sneakers, and Shakeel looked handsome in a white t-shirt with denims.

Sohail Khan Snapped At The Airport

Sohail Khan was snapped at the airport on Sunday. He looked like a total hunk in a grey sweatshirt and denims.

Father - daughter duo Ananya Pandey and Chunky Pandey were snapped when they went out for lunch on Sunday afternoon. Ananya looked pretty in a light blue t-shirt and white denims, whereas Chunky Pandey sported a white shirt with denims. Ananya is all set to make her big Bollywood debut with Student of the Year 2, in which she will be starring opposite Tiger Shroff and Tara Sutaria. 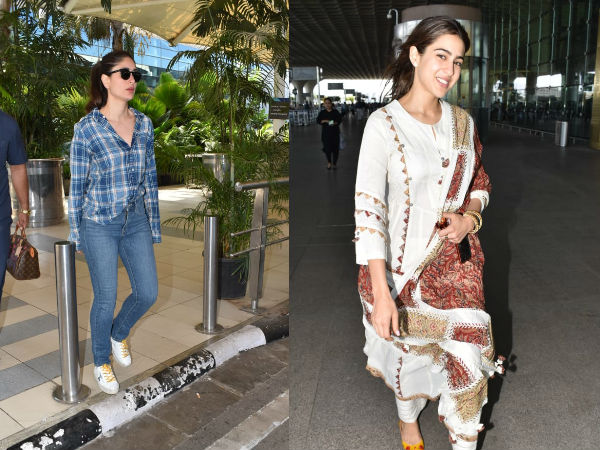 MOST READ: Kareena Kapoor Khan Goes Casual At The Airport; Sara Ali Khan Flashes A Beautiful Smile To The Paps