Karishma Kapoor was snapped at the airport on Friday afternoon, looking chic as ever. Sunny Leone and her hubby Daniel Weber returned to Mumbai, sharing a laugh as they were snapped by the paparazzi. Shahid Kapoor sported an all black attire to the gym today. Alia Bhatt was snapped in a fresh no make up look as she was out and about in the city today. Disha Patani was snapped in a casual avatar with a friend. Take a look at all their pictures!

Karishma Kapoor Dons An Effortless Chic Look To The Airport

Karishma Kapoor is a queen of chic fashion. Today, she was snapped at the airport pulling off yet another effortlessly chic look. Karishma looked gorgeous in a navy blue button down dress with a brown blazer over it. She carried a black handbag and sported black ankle boots to go with her outfit.

Sunny And Her Hubby Are All Smiles At The Airport

Sunny Leone and her husband Daniel Weber were also spotted at the airport on Friday afternoon. They both twinned in all black outfits. While Sunny went super casual in a black hoodie and black track pants, Daniel looked handsome in a black sweatshirt with dark grey denims. Daniel had his arm around Sunny and they both seemed to be sharing a laugh over something as they were snapped by the paparazzi. Just a few days earlier, we saw them head off to an unknown destination. Was this a short Valentine's Day vacation? Wish we knew.

Shahid Kapoor is a regular to the gym and his hot body is a testament to that. Today, Shahid got papped after sweating it out at the gym He sported an all black look to the gym and a really cool pair of sneakers. Shahid has been filming for his next film, Kabir Singh, which is a Bollywood remake of the Telugu hit film, Arjun Reddy. He has been filming at various locations such as Mussoorie and Mumbai, with his co-actor Kiara Advani.

Alia Bhatt Keeps It Casual In A No Make Up Look

Alia Bhatt was spotted at the Matrix Office in Bandra on Friday evening. She kept it casual in a coordinated green outfit with a t-shirt and leggings, and a black zip up hoodie over it. She looked fresh in a no makeup look when she was spotted today. Alia has been reveling in the success of the opening of her latest film Gully Boy and has received tremendous praise for her performance in it.

Disha Patani Snapped With A Friend

Disha Patani was spotted with a friend on Friday evening. She looked pretty in a casual avatar, wearing a cropped zip up hoodie and red high waisted shorts. Disha will be seen in Salman Khan's Bharat, which also stars Katrina Kaif, Tabu, and Varun Dhawan in a cameo appearance. 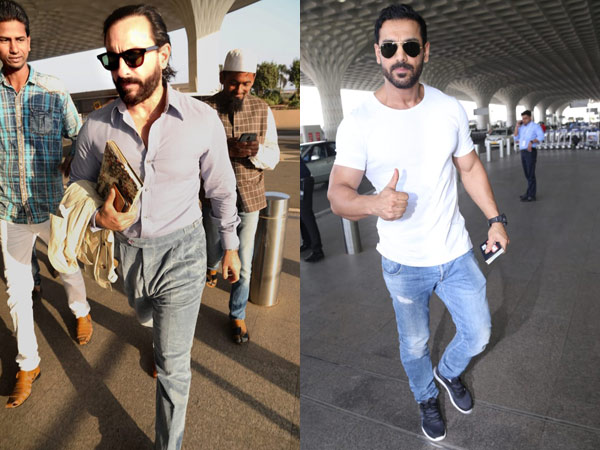