Kartik Aaryan is the latest Bollywood celebrity to launch his YouTube channel. He is all set to give fans a special view into his life through his channel which launched on Monday, September 16. We will get to see Kartik behind the scenes of some of his shoots, his fun vacations across the world, and his candid, spur-of-the-moment interactions with fans.

The Sonu Ke Titu Ki Sweety star took to his Instagram to announce the launching of his Youtube channel. In an Instagram video, he gave us a sneak peek of what his channel will hold. For his caption, he wrote, "Every bit of My life belongs to you guys. So here's welcoming you all into my personal world filled with love, laughter and happiness... Here's a sneak peek of My Youtube channel- Kartik Aaryan Launching Today," (sic).

Every bit of My life belongs to you guys. 💥 So here's welcoming you all into my personal world filled with love, laughter and happiness... 😁😍 Here’s a sneak peek of My Youtube channel- Kartik Aaryan ▶️💻 Launching Today 🎭🤟🏻

He is among the growing list of Bollywood celebrities, such as Alia Bhatt, Jacqueline Fernandez, and Disha Patani, to launch their own YouTube Channels.

Kartik has been in the news lately because of his alleged relationship with Sara Ali Khan. The two have worked on their first movie together, a sequel to Imtiaz Ali's Love Aaj Kal. Ever since, Sara and Kartik have been spotted together many times, exploring cities, being present on each other's birthdays, picking up each other at airports and so on. The sequel to Love Aaj Kal, which is untitled as yet, is slated for a Valentine's Day release in 2020.

The actor is currently shooting for a remake of the 1978 film, Pati Patni Aur Woh, starring alongside Bhumi Pednekar and Ananya Pandey. The original starred Sanjeev Kumar, Vidya Sinha and Ranjeet Kaur. The film is directed by Mudassar Aziz, and is produced by Juno Chopra. It is scheduled for release on December 6, 2019. Kartik was last seen in Luka Chuppi opposite Kriti Sanon. 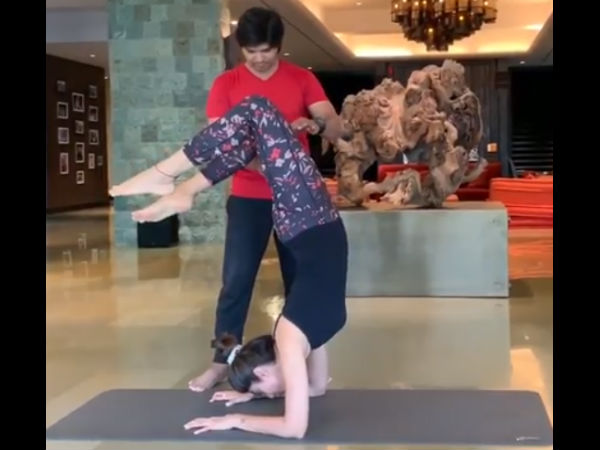