Kartik Aaryan is all set for his forthcoming release - Pati Patni Aur Woh, a film which revolves around an extramarital affair. In the film, the actor plays the role of Chintu Tyagi, who's married to Vedika Tyagi (Bhumi Pednekar) and things get messy when Tapasya Singh (Ananya Panday) enters his life. In his recent tete-a-tete with TOI, when Kartik was asked, if he is allegedly caught between two girls in real life too (hinting at Sara Ali Khan and Ananya), here's what the actor had said... 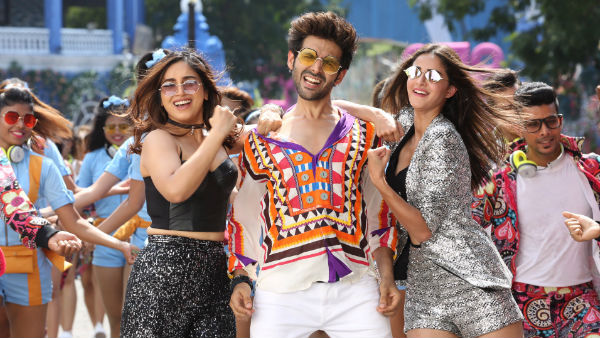 Pati Patni Aur Woh First Review Out: Did Kartik Aaryan Hit The Ball Out Of Park?

Kartik On Dating Sara Or Ananya

Reacting to his alleged rumours of affairs with Sara and Ananya, Kartik said that he has become so used to such speculations that one day if the media doesn't write these stories about him, he feels something is wrong.

"There is nothing to deal with. I am in a happy space and I am constantly working. I don't care about my link-up rumours. My mind is occupied with how I can push the envelope with my work. As far as PPAW is concerned, it's a modern take on relationships," remarked the actor.

Does Kartik Believe In A Happy Marriage?

Speaking of the institution of marriage, Kartik said that he truly believes in it and also asserted that he thinks he will be a great husband. "I will take good care of my wife and I will be honest with her," said Kartik.

Kartik chose to avoid the million bucks question and replied, "I don't talk about my personal life."

Pati Patni Aur Woh is releasing tomorrow i.e., December 6, 2019. The film will be clashing with Arjun Kapoor's Panipat at the box office.