The much awaited web series Made In Heaven is all set to premiere today, March 8th. Creators Zoya Akhtar and Reema Kagti hosted a special event to launch Made In Heaven with the cast and crew of the web series. Kalki Koechlin, Jim Sarbh, Arjun Mathur, Sobhita Dhulipala, Shashank Arora, Shivani Raghuvanshi and others were present at the launch. See the pictures!

The Cast Of Made In Heaven

The cast of Made In Heaven, Shashank Arora, Arjun Mathur, Sobhita Dhulipala, Jim Sarbh, Kalki Koechlin and Shivani Raghuvanshi posed for pictures at the launch of the much awaited web series. Shashank, Arjun and Sobhita had dressed up in ethnic wear, whereas Kalki looked pretty in a jump suit, Jim looked cool in a shirt teamed with ripped denims, and Shivani wore a sheer top and paired it with palazzo pants.

The ladies of the web series, Kalki, Sobhita and Shivani posed for pictures for the media at the launch of Made In Heaven on Thursday afternoon. Made In Heaven is a drama series about the lives of two upscale wedding planners. Talking about her character, Kalki had said in an interview with The Week, "I didn't read the story I only read my part and loved it. It was interesting how throughout the series you get a chance to see this person, through her therapy sessions she undergoes, how she's crumbling. It was a pretty complex character to play."

The Leading Men Of Made In Heaven

Jim Sarbh, Arjun Mathur and Shashank Arora came together for pictures at the launch of Made In Heaven.

The Creators Of Made In Heaven

The creators of Made In Heaven, Reema Kagti and Zoya Akhtar, were excited to launch the web series. Their previous endeavor together, the movie Gully Boy, has been rocking the charts at the box office, with critics having given the film about underground rap scene in Mumbai, some rave reviews! 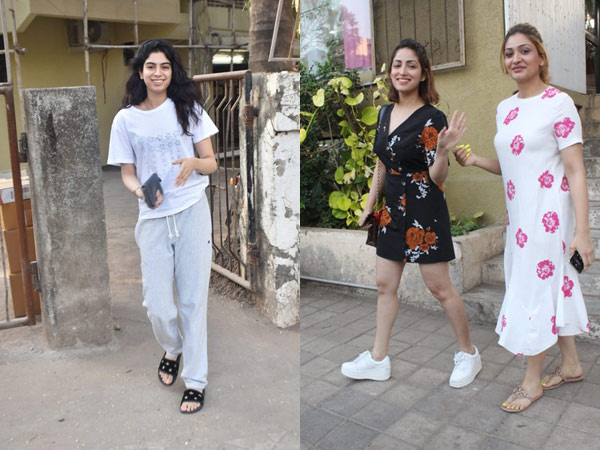