Malaika Arora and Sussanne Khan are two of the most beautiful women in Bollywood. The two looked like absolute divas when they were snapped post a salon session in the city. Photograph star, Sanya Malhotra got papped in the city after a work out session at the gym. The 'jhakaas' star Anil Kapoor was taking a stroll with hair stylist Hakim Aalim, post a salon session, and the two were snapped by the paparazzi. Check out their pictures!

Malaika Arora makes heads turn wherever she goes and her outfits right from her hair to her footwear are always on point. On Friday afternoon, Malaika was snapped after a salon session and she looked every bit the diva that she is. She was wearing a dark green maxi dress with a plunge neck and she looked lovely as always in it. She accessorized with a pair of silver sandals and a cool pair of sunglasses.

Sussanne Khan too visited a salon for her weekly beauty therapy on Friday evening. Sussanne sported a casual avatar, wearing a black button down shirt with white denims. She wore a pair of white flip flops and carried a brown handbag. Sussanne was also carrying a silver pair of sandals with her and it looked like she was prepared to do a quick swap of footwear.

Sanya Malhotra was snapped out and about in the city on Friday morning and she looked cool in a casual avatar. Sanya was sporting a red t-shirt with black tights. She accessorized her outfit with a cool pair of sunglasses and a black handbag. Sanya was last seen in the movie Photograph, opposite Nawazuddin Siddiqui. She was praised for her performance in the movie although the movie itself received average reviews.

The Jhakaas star Anil Kapoor too decided to indulge in a salon session and he was snapped with the hair stylist Hakim Aalim post that. Anil looked cool sporting a black sweatshirt with black sweatpants and a pair of white sneakers. Anil was last seen in the action comedy film Total Dhamaal, in which he reunited with Madhuri Dixit on screen after many years. 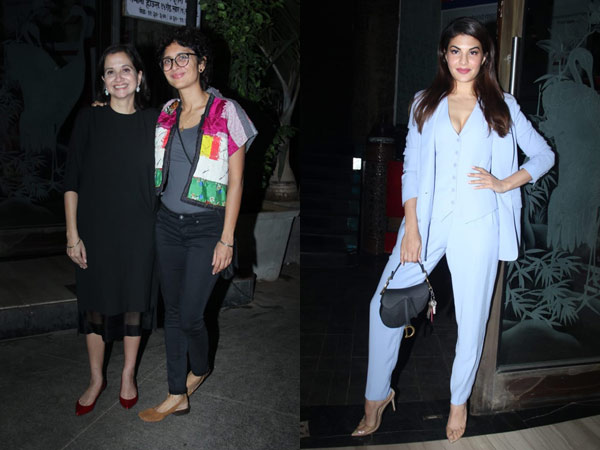