Since the last few days, the FaceApp selfies have taken the internet by storm. Not just commoners, even our Bollywood celebrities are obsessing over this app where you get to pictures of your old selves by using an age-filter in this photo application.

However, actress Neetu Kapoor has a slightly different take on this latest internet trend and thinks that the app is 'exaggerated'. To prove her point, she posted a throwback picture of her actor husband Rishi Kapoor's childhood days and juxtaposed it with one of his recent pictures.

She captioned her Instagram post as, "This pic proves FaceApp is so exaggerated." Have a look at it here-

This pic proves Faceapp is so exaggerated 🥴

Reacting to Neetu's post, one netizen wrote, "Hahaha first one who is real and still the same." Another one commented, "Both are so good, cute and poised."

Currently, Rishi and Neetu are stationed in New York for the former's cancer treatment. The actor is expected to return to Mumbai soon.

Meanwhile in a recent interview, the 'Jhootha Kahi Ka' actor spoke about losing his mom just days after he left for US for the treatment.

Rishi was quoted as saying by a leading daily, "That was very unfortunate. I left for the US on September 29, and my mother passed away on October 1. She knew that I had contracted a serious disorder. That entire period was traumatic for me. I was caught up with my problem. I didn't know what to do, and I didn't have an option because I had to be here in New York. My brother told me that by the time I would get back, it would be too late. Also, I didn't have the stamina or strength to come back." 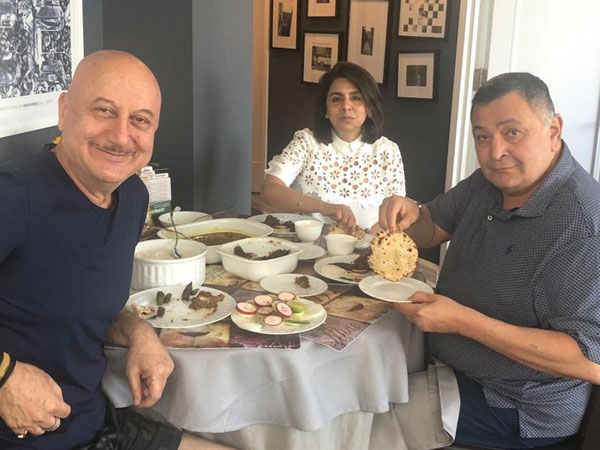 Rishi Kapoor Is On Cloud Nine After Having Some 'Correct Aate Ka Phulka' At Anupam Kher's House!