Soni Razdan, Mahesh Bhatt and others were at the trailer release of the film No Fathers In Kashmir. The film, which was stuck at the censor board because of a ban, was cleared recently, and is now set to hit the theatres on April 5th. Bollywood newbies, Pranutan Bahl and Zaheer Iqbal were promoting their first film, Notebook, on Tuesday afternoon. The newcomers are being launched by Salman Khan in this production of his. See pictures.

The ban on Ashvin Kumar's film, No Fathers In Kashmir, has finally been lifted and we get to watch this seemingly heart touching and suspenseful film soon when it hits the theatres on April 5th. On Tuesday, Soni Razdan and Mahesh Bhatt were at the trailer release of the film. Soni Razdan looked elegant in a floor length white, floral printed anarkali dress, whereas Mahesh Bhatt was sporting an all black look.

The Team Poses For Pictures

The film had earlier been given an ‘A' certificate by the Central Board of Film Certification. Following a long tussle between the filmmakers and the board, the CBFC later gave the film a U/A certificate, given that the filmmakers incorporate a few changes to it.

Mahesh Bhatt Spoke About The CBFC Ban On The Film

Talking about what the film went through at the CBFC, Mahesh Bhatt said at the trailer launch, "It's a tragedy that a film like No Fathers In Kashmir, a filmmaker who puts his film together, and run from pillar to post begged people to get it through. In this age and time, is there anything called censorship? I have the audacity to look at the truth, the greatest epic which mankind has been blessed with, the Mahabharata came from the battle of Kurukshetra, in that moment of darkness, he who locks the eyes with the darkness discovers a life which Aswin has discovered."

Pranutan Bahl and Zaheer Iqbal are all set to make their big Bollywood debut with the upcoming film Notebook. Produced by Salman Khan, Notebook is a unique love story set against the backdrop of Kashmir.

Pranutan Bahl looked lovely at the promotion of Notebook on Tuesday afternoon. She wore a white tank top with high rise flare bottom denims, and a yellow floor length kimono over it.

Zaheer Iqbal looked cool in a navy blue sweater teamed with ripped jeans and white sneakers at the promotion of Notebook. The film is set to hit the theatres on March 29th, 2019.

View the trailer of No Fathers In Kashmir here - 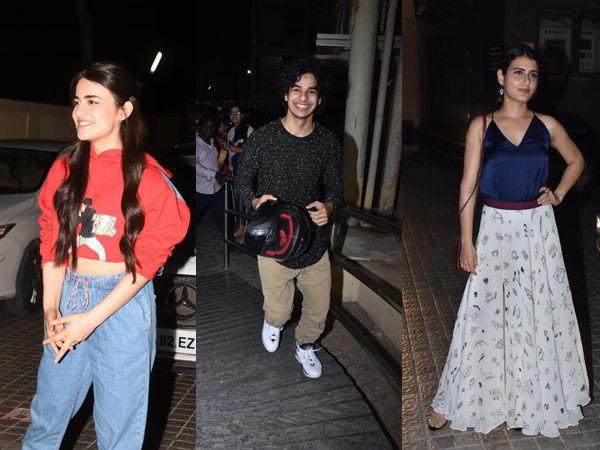