Alia Keeps It Casual And Cool At The Airport

Alia Bhatt was spotted at the airport late on Thursday night. Alia kept her look casual and chic, dressed in a yellow and white stripped crop top which she teamed with a pair of khaki green sweatpants. Over this, Alia wore a button down green jacket and a pair of yellow sneakers. She accessorized with a white tote bag and a cool pair of sunglasses. Alia will next be seen in Karan Johar's multi starrer film Kalank which is set to release on April 19th.

Anushka Sharma was also snapped at the airport on Thursday night. Anushka's airport style was classy and fabulous like always. She wore a white tank top with grey pants and a matching overcoat with it. She wore a pair of black sandals and carried a Fendi hand bag. Anushka was last seen in the film Zero, which was directed by Anand L. Rai and also starred Shah Rukh Khan and Katrina Kaif.

Sanya Malhotra Snapped In The City

Sanya Malhotra looked very pretty when she was snapped post her dinner in the city on Thursday night. She was dressed in a white printed maxi dress which she accessorized with a black waist belt and a brown sling bag. Sanya was last seen in the film Photohgraph opposite Nawazuddin Siddiqui, and she was praised for her great performance in the film.

Bipasha Basu and her husband Karan Singh Grover smiled for the cameras when they were snapped in the city on Thursday night. Bips kept her look casual by donning a black top with a pair of flare bottom denims. Karan, on the other hand, wore a black t-shirt with a plaid print on it, and teamed it with a pair of black denims and white sneakers. He accessorized with a black hat and looked rather savvy in this avatar. 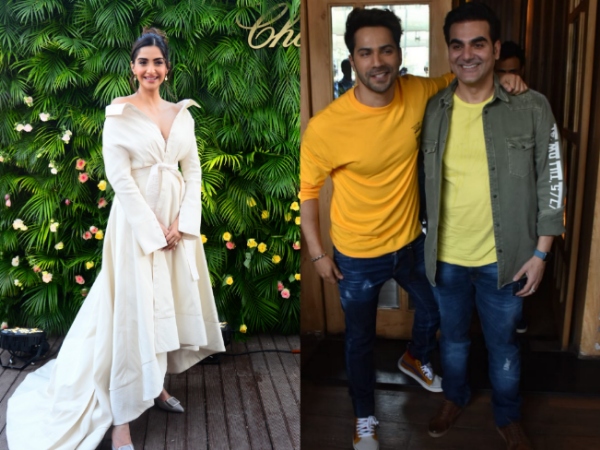 MOST READ: Sonam Kapoor Proves Why She Is A Fashionista At An Event; Varun Dhawan At Arbaaz Khan's Chat Show