We already told you that Akash Ambani and Shloka Mehta will be exchanging nuptial vows today. Recently, the Ambanis and the Mehtas had hosted a lavish pre-wedding bash at St.Moritz in Switzerland. Meanwhile, the wedding celebrations have already began at Jio Global Centre in Mumbai. Aamir Khan and his wife Kiran Rao were among the first Bollywood celebrities to walk in at the wedding venue. Rajkumar Hirani and his wife, Vishal-Shekhar, Jackie Shroff were also spotted at the venue.

Not just B-town brigade, many prominent faces from the world of business and politics will also be making their presence felt. Meanwhile, here are some more new pictures from the wedding venue that you just shouldn't miss-

Ranbir Kapoor, Ayan Mukerji and Karan Johar give a 'picture-perfect' moment to the paparazzi and look wedding ready.

The Kapoor lad who is a close friend of Anant Ambani, loo handsome in a maroon outfit and is seen here striking pose for the lens-men.

The filmmaker-producer brought in some sunshine by donning a yellow kurta for Akash-Shloka's wedding.

Juhi Chawla looked mesmerizing in a green outfit and walked in with her hubby Jai Mehta.

The former UK PM was also papped by the shutterbug with his wife at the wedding venue. Tony opted for a navy blue bandh gala with matching pants. His wife Cherie wore a peach hued Indian outfit. 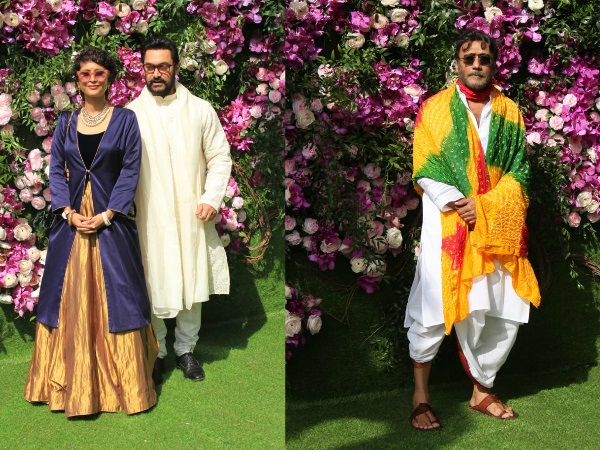