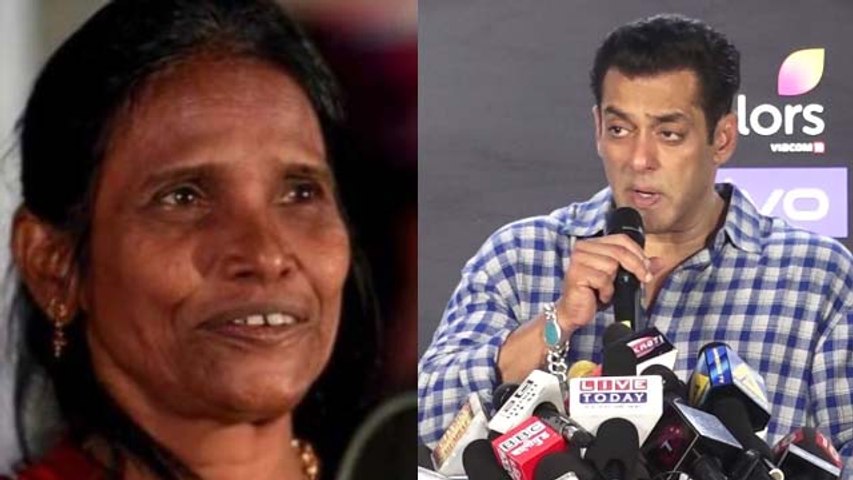 Ranu Mondal took the internet by storm when a video of her rendition of Lata Mangeshkar's song 'Ek Pyaar Ka Nagma Hai' went viral. As the video spread like wild fire on social media, the lady even bagged her Bollywood singing debut with Himesh Reshammiya's upcoming film, 'Happy Hardy & Heer'.

Sometime back, there were rumours about Salman Khan gifting a flat to her after getting impressed by her voice in the viral video. Finally, the superstar cleared the air at a recent event.

Reacting to the reports, the superstar told IANS, "That's false news. Even I have heard this. What I have not done, there is no credit for that. I have done nothing like that."

Earlier, Ranu Mondal Too Reacted To These Reports

A Navbharat Times report had quoted her as saying, "I didn't tell anyone to help me and I'll not ask for any help from Salman Khan too. At first, when I heard these rumours, I thought it could be true or not. I also heard him gifting me a red car, there were a lot of them. But, I would've trusted the news only if Salman had contacted me directly."

When the veteran singer was asked about Ranu's claim to fame by singing her song, she had said, "Agar mere naam aur kaam se kissiko bhala hota hai toh main apne-aap ko khush-kismat samajhti hoon (If anyone benefits from my name and work, I feel fortunate).

"But I also feel imitation is not a reliable and durable companion for success. By singing my songs or Kishoreda's (Kumar), or (Mohd) Rafi Saab's, or Mukesh Bhaiyya or Asha's (Bhosle) numbers, aspiring singers can get short-term attention. But it won't last."

Was Ranu Upset With Lata Mangeshkar Taking A Dig At Her?

When asked about it, she had said, "Lataji ki umar ke hisab se mai choti thi, hu aur aage ja kar bhi rahungi.. Bachpan se unka awaz pasand hai. (As far as age is concerned, I am younger to her and will always remain her junior. I have loved Lataji's voice since childhood)."

Salman Khan Maintains A Dignified Silence Despite The Shelving Of 'Inshallah'