Sameera Reddy is currently in a happy space. The actress and her hubby Akshai Varde became parents to a baby girl on Friday (July 12). Sameera later even took to her Instagram page to share a glimpse of the newborn and captioned it, "Our little angel came this morning 🌸My Baby girl ! Thank you for all the love and blessings ❤️🙏🏻 #blessed." (-sic)

On the work front, earlier, Sameera confided that she felt abandoned by the industry when she decided to take a sabbatical. In an interview to Pinkvilla, the actress reconsidered that statement and admitted that she thinks it was rude of her to say that. Instead, it was she who had abandoned the industry.

'Not The Industry But I Abandoned Them', Says Sameera

The actress told Pinkvilla, "I would like to rephrase that [the statement]; it is rude to say that they abandoned me. I will take my statement back and say that in fact, I abandoned them. I feel somewhere there were two things that happened; firstly, I couldn't keep up with the lifestyle, parties, we all know how it is here... one whole group and people hanging in there and chaato that group only."

She further added, "It is a game. There are few people who have been still there for me like Shilpa Shetty and family, who still call and inquire. Others vanished but now everyone is back, now I am invited everywhere (laughs). I just don't go, I don't have the bandwidth for it. Plus I have the shiest husband and when I met him, he thought I was Lara Dutta."

The Actress Admitted Being Depressed During Her First Pregnancy

'I Had Tonnes Of Issues', Says Sameera

"What happened that time was that I took a lot of hormones, I had problems with my pregnancy and I was bed-ridden. I had tonnes of issues but it was my mental state that consumed me. I felt like I failed myself. I let my body go. I touched a 102 KGs, my face was so fat and it was the horror that somebody will look at me, and they did, like I have had people say, 'Is that Sameera Reddy?' But I said I was a good mother because even if I went to the bathroom and cried, Hans (her son) never saw it. I always came out and was top-notch with him. I was the best wife that I could be to my husband, but internally there was another story going on."

"Everyone told me that after what you went through in the first pregnancy, do you really want to get pregnant? I was like yes! The time came when I got a web series offer last year in May which had an amazing storyline. I spoke to Akshai [her husband] and asked him if I should take it up because it was my chance to get back but then I told him I want to embrace motherhood again.

He asked me if I was ready for it because last time I broke into pieces. I told him that this is my decision. 'I don't want to go to work but get pregnant again.' This time I will do it my way and not let anything affect me, whoever wants to say anything, I will not mind. That energy of mine has resonated throughout the pregnancy." 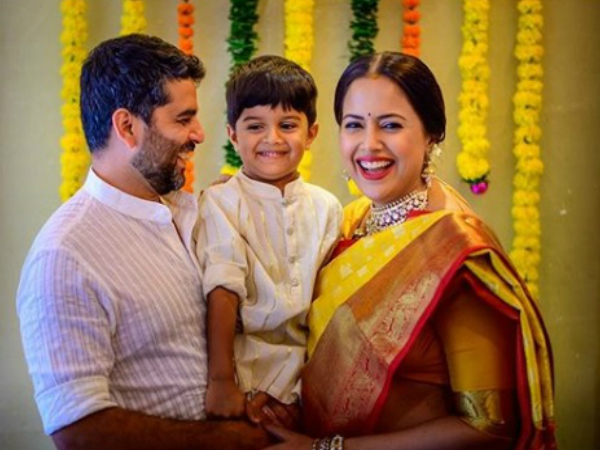