Sara Ali Khan was spotted out and about in the city today and she gave a cheerful smile to the cameras when clicked. Aditi Rao Hydari was spotted at a salon on Tuesday afternoon, dressed in an ultra casual avatar. Sonakshi Sinha has been working out at the gym off late and was snapped as she headed in for her work out session today. We also spotted former Miss World Manushi Chillar at a café in Mumbai today. Check out all these celebs pictures!

Sara Ali Khan was spotted in the city today and she had the cutest smile to give out to the cameras when she was clicked. Sara, as we all know, is full of fun, quirky energy and comes across as very genuine and down to earth in the way she speaks. Sara was wearing a light grey zip up hoodie and gym shorts with a pair of sneakers, and looked like she had just been to the gym.

Aditi Rao Hydari was snapped at a salon on Tuesday afternoon. She was sporting an ultra casual look in a black tank top, black tights, a navy blue striped zip up jacket and a pair of white sneakers. She looked cool sporting a pair of black aviator sunglasses. After her role in Padmaavat last year, Aditi has not been seen on the big screen in Hindi movies, though she has been working in the south on a few Tamil and Telugu films.

Sonakshi Sinha Heads To The Gym

From our everyday gym diaries, we have noticed that Sonakshi Sinha has been regularly heading to the gym off late. On Tuesday afternoon, Sona was going in for her workout session wearing an all black attire in a black sheer t-shirt, black tights and black sandals. We also noticed an injury on her left foot where there was a bandage wrapped around.

Manushi Chillar Spotted At A Cafe

2017's Miss World winner, Manushi Chillar was spotted outside a café in Mumbai this afternoon. She looked pretty in a light blue spaghetti top which she teamed with navy blue paper bag trousers, and black sandals. A month ago, there were reports making the rounds that director Farah Khan would be launching Manushi in her next movie. 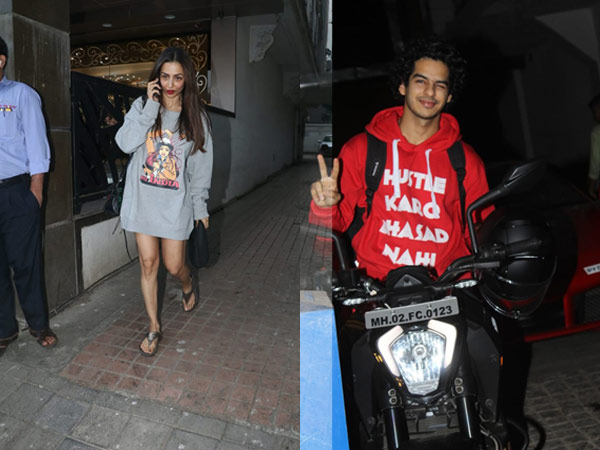 MOST READ: Malaika Arora Steps Out Casual In A Sweatshirt Dress; Ishaan Khatter Spotted Going For A Bike Ride