The Badshah of Bollywood, Shah Rukh Khan was snapped with his adorable son AbRam Khan at the airport on Monday night. Abram, shy of the paparazzi, hid his face from the cameras. Malaika Arora hit the gym on Tuesday afternoon and was snapped by the shutterbugs. Arbaaz Khan's girlfriend Giorgia Andriani was also snapped at the same gym as Malaika. Shilpa Shetty and her husband Raj Kundra were spotted at the airport with their son, Viaan Raj Kundra. See pictures!

AbRam Khan Hides From The Paparazzi

Shah Rukh Khan and his adorable son AbRam Khan were snapped at the airport in the early hours of Tuesday morning. The little AbRam, who is known to be shy of the paparazzi, hid his face from the cameras when the shutterbugs snapped pics. Shah Rukh Khan looked cool in a white hooded jacket teamed with black cargo pants, and a black hat.

Malaika Arora Snapped At Her Gym

The fabulous Malaika Arora was snapped hitting the gym on Tuesday afternoon. Malaika looked cool in her Tuesday gym look, wearing a black tank top and grey shorts, with a pair of white sandals when she was snapped.

Arbaaz Khan's girlfriend Giorgia Andriani was also snapped at the same gym as Malaika, on Tuesday afternoon. Giorgia looked hot in her gym look. She was wearing a grey tank top with hot pink tights, and a pair of navy blue sneakers.

Shilpa Shetty With Her Family At The Airport

Shilpa Shetty was spotted at the airport with her family on Tuesday afternoon. Shilpa donned a formal chic look, wearing a navy blue blazer with denims and a pair of nude shoes. Her hubby Raj Kundra was wearing a camouflage zip up jacket with a navy blue t-shirt and jeans. Their son Viaan twinned with his dad in the jacket department. 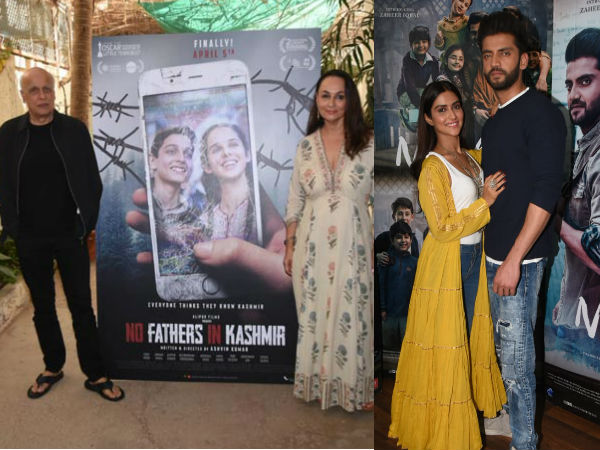