After the first look of Saif Ali Khan in Tanhaji: The Unsung Warrior was revealed, netizens pointed out the poster's similarity with Jon Snow from the Game of Thrones.

After Ajay Devgn revealed the first look poster of Saif Ali Khan's next periodic drama, Tanhaji: The Unsung Warrior, Twitterati came up with mixed reactions. While some applauded Nawab Junior's furious warrior look, others could not help but compare it to Jon Snow from HBO's popular TV series, Games of Thrones.

In the poster, Saif can be seen looking straight into the camera, wearing a furry robe and holding a huge sword, which looks strikingly similar to Jon Snow's iconic look from GoT.

In the film, the actor plays the role of Udaybhan Rathod, the antagonist who fought Shivaji Maharaj and his army during the Battle of Sinhagad. Instagram users commented on the poster, pointing out the unbelievable similarity in Saif Ali Khan's style and that of Jon Snow.

Coming back to the movie, Tanhaji: The Unsung Warrior will narrate the Sinhagad battle in which Tanhaji sacrificed his own life while fighting bravely against Udaybhan to capture the Kondana Fort from the Mughals.

While talking about the movie, Saif said in an interview that he was working really hard to do justice to his character. He also stated that the film has a lot of sword fighting sequences. The actor further added that he and Ajay will have an intense sword fight sequence in the climax of the movie.

The film is being directed by Om Raut and Ajay Devgn is producing it. Tanhaji: The Unsung Warrior is scheduled to hit the big screens on January 10, 2020. The movie was in the headlines earlier when it was revealed that it will have a box office clash with Deepika Padukone starrer Chhapaak. 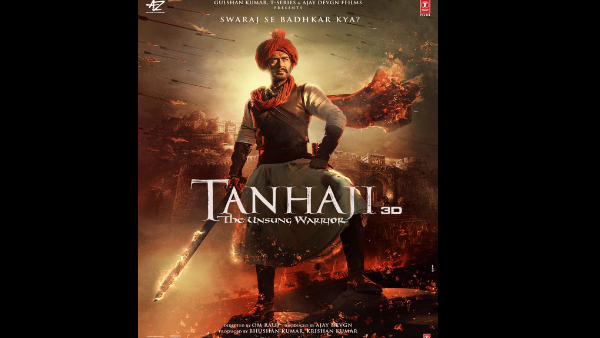