Varun Dhawan received a bouquet of flowers from a fan at the airport and he posed for pictures with her. Alia Bhatt went out for a weekend lunch to a popular café in Mumbai city. Jacqueline Fernandez sported an all black outfit to the airport in the early hours of Sunday morning. Sonu Sood was snapped in the airport with his son. See pictures of these celebrities.

Varun Dhawan Receives A Bouquet Of Flowers From A Fan

Varun Dhawan was snapped at the airport on Sunday morning, where he was welcomed by a female fan with a bouquet of flowers. Varun looked cool in a casual avatar, wearing a grey t-shirt with black sweatpants and a black zip up hoodie. Varun is all geared up for the release of his next movie, Kalank. The film is produced by Karan Johar and Varun has said that it is his biggest film so far.

Alia Bhatt was having a weekend lunch out in the city at a popular café. She was snapped by the paparazzi post her lunch, looking very pretty in a summery outfit. Alia was wearing a blue floral jumpsuit which she layered with a denim jacket over it. She had tied up her hair in a ponytail and sported a cool pair of sunglasses. Alia too will be seen next in Kalank, which has a huge star cast of Varun, Madhuri Dixit, Sonakshi Sinha, Aditya Roy Kapur, and Sanjay Dutt. Kalank releases on April 19th.

Jacqueline Fernandez Snapped At The Airport

Jacqueline Fernandez was snapped at the airport in the early hours of Sunday morning. She sported an all black outfit, wearing a black sweater with black denims. She sported a pair of vintage sunglasses and black combat boots to complete her look. On the work front, Jacqueline will be seen next in a film titled Drive. It is a Bollywood remake of an American film with the same name.

Sonu Sood At The Airport With His Son

Sonu Sood was snapped at the airport with his son on Sunday afternoon. Sonu looked cool in a white t-shirt with denims, over which he wore a maroon leather jacket. Sonu was last seen in Rohit Shetty's blockbuster film Simmba, starring Ranveer Singh. 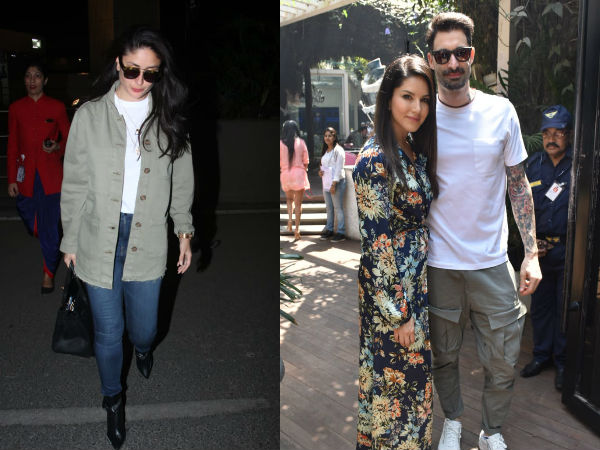 MOST READ: Kareena Kapoor Looks Glam At The Airport; Sunny Leone And Hubby Daniel Weber Pose For The Paps