Vicky Kaushal was the judge of a talent contest in Mumbai city, and was looking totally savvy in a suit. Aamir Khan was out and about in the city on Friday afternoon when he got papped. Parineeti Chopra was spotted after a shoot in the city and she flashed a pretty smile for the cameras. Nawazuddin Siddiqui and Sanya Malhotra were promoting their upcoming film Photograph on Friday. See these celebs' pictures!

Vicky Kaushal turned up the heat at a talent contest in Mumbai city. He suited up for the event and looked totally savvy as he judged the contest. Vicky was wearing a pin stripped black suit with a black shirt and a pair of formal black shoes for the event. After the fantastic success of his last film, Uri: The Surgical Strike, Vicky will is now filming for an untitled horror film.

Aamir Khan Snapped Out And About In The City

Aamir Khan was out and about in the city when he got papped on Friday afternoon. Aamir sported a casual look, wearing a black t-shirt with black jeans and an Adidas hat. Aamir was last seen in Thugs of Hindostan which failed to impress audiences and critics alike. He starred alongside Amitabh Bachchan and Fatima Sana Shaikh in the movie.

Parineeti Chopra Snapped After A Shoot

Parineeti Chopra was shooting an ad in the city post which, she got snapped by the paparazzi. Parineeti looked chic in a white top teamed with a yellow skirt, and a matching jacket. She sported a pair of yellow sneakers with her outfit and flashed a gorgeous smile for the cameras. On the work front, Parineeti will next be seen in the Akshay Kumar starrer, Kesari, which is set to release on March 21st.

Nawazuddin Siddiqui and Sanya Malhotra were busy promoting their upcoming film Photograph on Friday evening. The film will portray a unique love story in which a tourists' photographer (Nawazuddin) at the India Gate will fall in love with a woman (Sanya) he photographs. Sanya looked lovely in a checkered blue strapless maxi dress whereas Nawazuddin wore a sweater with a pair of formal trousers at the promotional event. 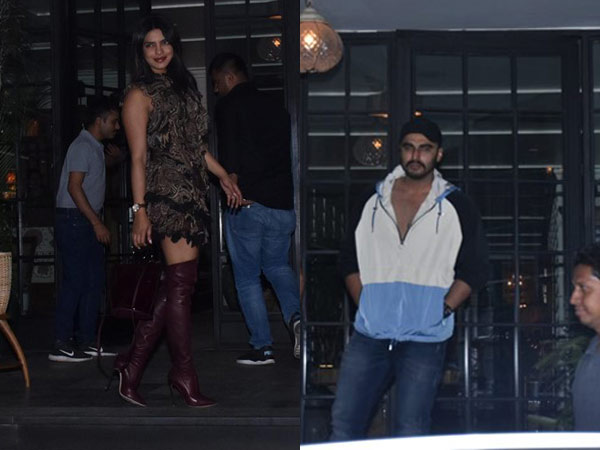