A few days ago, Sara Ali Khan made an official announcement about her upcoming project, Atrangi Re, which will be helmed by Aanand L Rai. The film will mark the first collaboration of Sara Ali Khan with Akshay Kumar and South superstar Dhanush.

While speaking about the film, Aanand L Rai says that he will be presenting actors Dhanush, Sara Ali Khan and Akshay Kumar in a never seen before avatar.

Atrangi Re reunites Dhanush and Aanand after their 2013 critical hit Raanjhanaa. For the unversed, the film will feature Akshay in a special role, while Sara will play the female lead.

The Zero director said, "All the three characters are funnily weird and it's their emotional journey. I am always looking for partners who are as emotionally touched as I am with the story and all three of them are like that. Every character in this film has its own traits will put them in an unseen space." 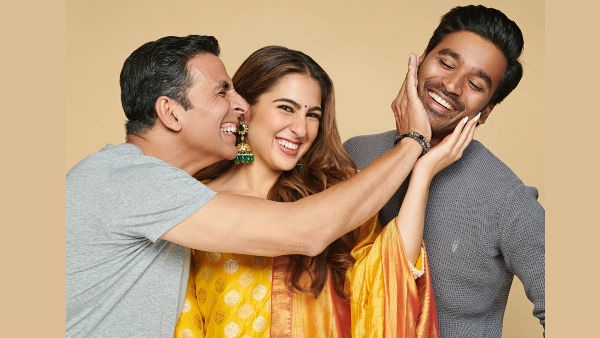 Wait, What? Is Akshay Kumar Getting Rs 120 Crore For Atrangi Re?

According to the makers, the film will commence shooting in March, first in Bihar and later in Madhurai.

Atrangi Re has been written by National Award winner Himanshu Sharma. AR Rahman will be scoring the music. The film is a joint production between Colour Yellow Productions, T Series and Cape Of Good Films.