Bollywood celebrities are taking to unique ways to connect with their fans and followers. The queen of dancing, Madhuri Dixit has started a dance initiative, through which she has been providing free dance lessons twice a week. Her Kalank co-star Alia Bhatt was all praises for this initiative, calling it a chance to 'learn from the best'.

Sharing the link to Madhuri's initiative, Alia wrote on Twitter, "Such a great initiative @dancewithMD Everyone, here's your chance to learn from the best, while staying indoors. Visit http://bit.ly/DWMFreeClassesEveryWeek to start learning now #StayHomeStaySafe #LearnAMove @MadhuriDixit," (sic).

Such a great initiative @dancewithMD 👏🏼👏🏼💃 Everyone, here's your chance to learn from the best, while staying indoors. Visit https://t.co/bVfMXrNsxi to start learning now #StayHomeStaySafe #LearnAMove @MadhuriDixit pic.twitter.com/9mds32VbcO

Alia and Madhuri gracefully set the stage on fire in the song Ghar More Pardesiya from the 2019 film Kalank. However, Alia admitted that it was a big relief to her that the song was not a dance-off between her and Madhuri. She also revealed that Madhuri was constantly telling her how to conduct herself, and was assuring her of her performance, including her expressions and steps.

Some time back, Madhuri posted a fun video of her performing Kathak while her son Arin is playing the Tabla. Later in the video, she ends up teaching him Kathak. Sharing the video, she wrote, "Quarantine is making all of us do things that we've always wanted to. Watch till the end to find out what I have always wanted to do #WhenArinDancedWithMadhuri," (sic).

Like other celebrities, Madhuri too has been spreading awareness about the Novel Coronavirus, and has also been sharing humorous posts to lighten the mood.

ALSO READ: Madhuri Dixit On Ek Do Teen Song: 'Shot With Real Crowd; People Would Fling Money On The Screens' 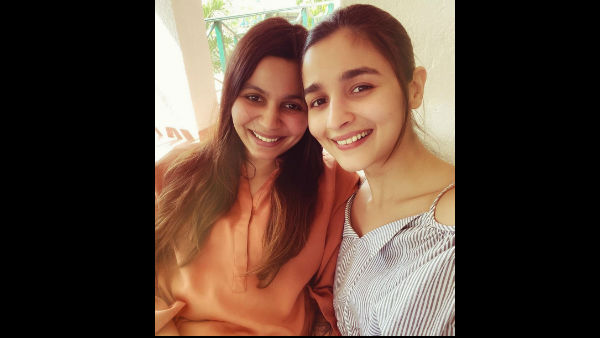 ALSO READ: Is Shaheen Bhatt Staying With Alia Bhatt And Ranbir Kapoor At His Home?