Akshay Kumar and Katrina Kaif's cop drama Sooryavanshi, scheduled to release on March 24, 2020, may soon get postponed. While several reports suggest the makers are considering to change its release to another date in April, fans have already begun reaching out to the makers asking for a change in release date.

The World Health Organization, yesterday, declared the coronavirus outbreak as a Public Health Emergency, with 62 confirmed cases of infected people in India. Amid the outbreak, several public places like theatres across the country may be shut till the end of March. Hence fans took to their social media accounts asking the leading star Akshay Kumar to change the release date of the film. Many claimed the film should be postponed to April 10.

#Sooryavanshi is too big a movie to take a risk to release on 24th March? It's prudent to shift the release date. Now..let's all wait for the official confirmation.

Coronavirus declared as a "pandemic" by World Health Organisation ....

#SooryavanshiTrailer hits 42M views in just 24Hrs. Look at the excitement for the movie among the moviegoers.Please @RelianceEnt don't Choose 24 Mar as the release date of Sooryavanshi.@DharmaMovies @karanjohar

This movie deserved better.
U guys are ruining it's true potential.
Please take the final decision as soon as possible.

Several industries are being affected by the outbreak including Hollywood and Bollywood, several studios have shut down productions and actors have also cancelled promotional tours for their upcoming films. If Rohit Shetty's Sooryavanshi postpones to a later date in April, it may face a box office impact as the release will clash with Ranveer Singh's 83. However, the makers are yet to share their point of view or make an announcement about the situation. 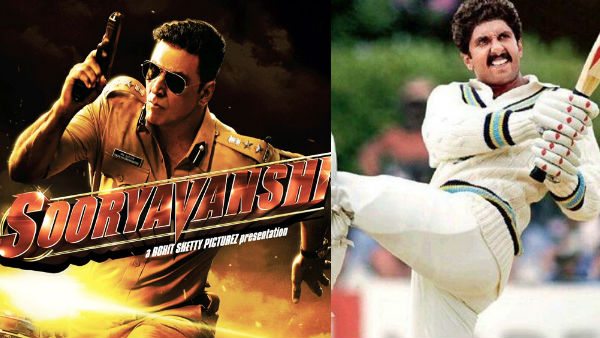 Sooryavanshi And '83 Release May Be Postponed Due To Coronavirus Outbreak