Mommy Soha Wishes Inaaya In The Most Adorable Way

The actress dug into her family album and pulled out a throwback picture of the birthday girl and her parents Soha and Kunal, holding cutouts of ice-cream cones. Soha captioned the picture as, "Three years old today @khemster2."

The diva wished her niece with a picture featuring her son Taimur Ali Khan and Inaaya from one of their play dates. Both the kids are seen holding books. Bebo captioned the picture as, "Happy birthday our beautiful Innaya ❤️🎈🎈."

The birthday girl is seen eating a cupcake while looking at the screen of a tab, which showed a group video call in progress. One can see a small plate of cupcakes with candles on them lying in front of her.

Soha and Kunal were blessed with their first child, Inaaya, in 2017. Speaking about how she evolved after becoming a mother, the actress was quoted as saying in a Hindustan Times interview, "I am the youngest in my family, I have never been responsible for anyone else, I've never had to look after anyone, I have never changed a diaper or fed someone or made someone sleep or been around someone so vulnerable...So it really is a life changing experience." 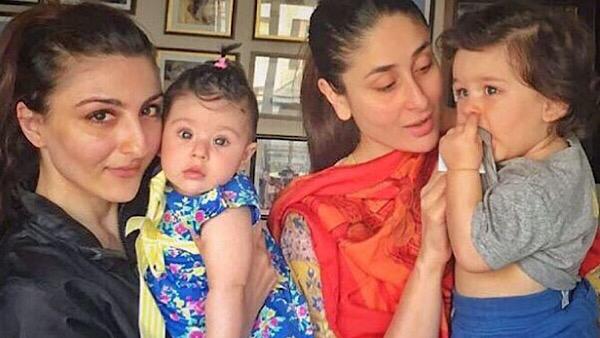