Sridevi and Boney Kapoor's daughter Janhvi Kapoor made a smashing debut in the film industry with Karan Johar's Dhadak in 2018. The star kid's debut was one of the most talked-about topic back then. Within a short period of time, Janhvi has emerged as one of the rising talents in Bollywood.

However, the young actress still continues to face constant comparisons with her mother, late actress Sridevi. Recently in an interview with Hindustan Times, the upcoming star opened up about this and said, "I think people need to accept that I'm a different person from my mother. There's a section of society which has been able to do that with Dhadak, but there are people who couldn't make that differentiation and they still look for Sridevi in me. Maybe after more of my work comes out, they'll understand I'm a different type of actor and I'll make different choices."

In the same interview, Janhvi spoke about the much-debated topic of nepotism and on being asked if people need to shut this topic, said, "Hopefully, my work will do that. I know for some, Dhadak wasn't reason enough to end the debate. I don't deny nepotism does exist. It's a reality in our industry, and every other profession. The doctor that I visit, his son is also a doctor but no one is holding a morcha outside their clinic that 'Nahin yeh toh nepotism hai, main nahin aane wala yahan ilaaj ke liye'. I understand there's a sense of alienation and a bit of judgment."

When quizzed if being a star kid has helped her in the industry, Janhvi replied, "There are things that people - who don't come from this background - would have gone through to get work and recognition, which I didn't have to. Their struggle is much more relatable for the common man than mine would be. In fact, I don't think I've had too much of a struggle, but now that I've got this opportunity, I better work my a** off to make it worthwhile for myself and for the audiences."

Janhvi's mother Sridevi has been a part of iconic films. On being asked if she would like star in any of the remakes of the Hawa Hawai actress's movie, Janhvi said, "I don't think that anyone can recreate that magic. No one can. Also, when something has been done so well, I don't know if it's right to try to attempt to do it again." 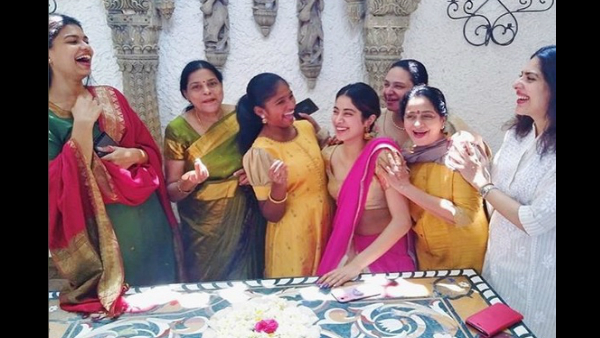 Janhvi Kapoor On The Pressure Of Being A Star Kid: 'It Won't Go Away Until I Prove Myself Worthy'