The Bombay High Court has asked Brihan Mumbai Corporation (BMC) to stop the demolition drive at actress Kangana Ranaut's Mumbai office. The court has asked the civic body to repond to Kangana's petition. BMC's response to Kangana's plea will be heard before the bench of justice SJ Kathawalla at 3pm tomorrow (September 10, 2020).

Kangana Ranaut's lawyer Rizwan Siddiqui told PTI, 'We filed a petition this morning seeking an urgent hearing. We have sought a stay on the demolition process by way of interim relief.

Earlier, in the morning, Kangana shared pictures of BMC officials carrying out the demolition work at her Pali Hill office in Mumbai. The actress lashed out at the Maharashtra government for targeting her, and called the demolition of her office as 'death of democracy." She also claimed that there is no illegal construction at her house.

Meanwhile, celebrities like Renuka Shahane, Sona Mohapatra and others reacted to the demolition of Kangana's property by BMC.

Renuka Shahane tweeted, "Though I did not like @KanganaTeam's comment comparing Mumbai to POK I am appalled by the revenge demolition carried out by @mybmc You do not have to stoop so low. @CMOMaharashtraplease intervene. There is a pandemic we are dealing with. Do we need this unnecessary drama?."

"Demolition squads now #Mumbai ??? What the hell is this. What do you expect from a government that doesn't win an election to come to power??!! Travesty. Sickening," read Sona Mohaptra's tweet.

Dia Mirza posted on her Twitter page, "Kangana comparing Mumbai to POK is not acceptable. But there is absolutely no doubt that @mybmc moving to suddenly conduct a demolition of areas of her office space is totally questionable. Why now? Why like this? What were you doing all this while if there were irregularities?"

On Tuesday, (September 8, 2020), Kangana had approached the Bombay High Court, challenging the notice issued by BMC for "illegal construction" at her property and sought a stay on the demolition process.

Meanwhile, Kangana Ranaut arrived in Mumbai today amid her ongoing verbal tussle with Maharashtra government, after she compared Mumbai to PoK and criticized the Mumbai Police over their handling of Bollywood actor Sushant Singh Rajput's death case. The actress has been given Y-plus security cover by the Ministry of Home Affairs (MHA) in the wake of her war of words with Shiv Sena leader Sanjay Raut. 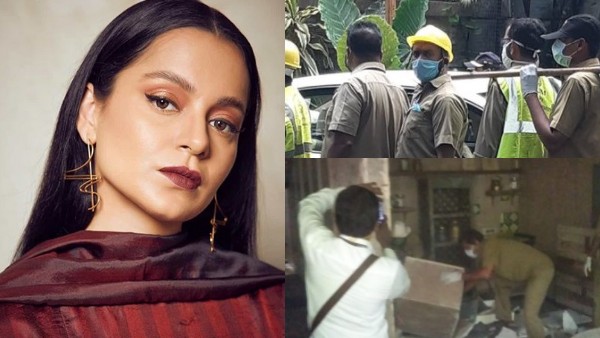 ALSO READ: Kangana Ranaut On Demolition Of Her Office: My Enemies Prove Again Why Mumbai Is PoK Now