Amid the ongong nationwide lockdown owing to the Novel Coronavirus pandemic, Bollywood celebrities are utilizing this unexpected break to spend some quality time with their loved ones. They are also keeping their fans engaged with entertaining videos on their social media handles. One Instagram page which is bringing us our daily dose of laughter is that of Karan Johar.

In the daily episodes of his unofficial Instagram show 'Lockdown with the Johars', the filmmaker has been posting hilarious videos featuring his kids, Yash and Roohi. From dismissing Karan's fashion sense to his films, the little munchkins never fail to troll their daddy dearest. At one instance, the little ones even mocked the director's 'tummy' and left everyone including KJo's industry colleagues in splits.

This time, Yash and Roohi made it clear to Karan that they ain't fans of his singing skills either. In the latest video, Roohi is seen asking the filmmaker not to make any noise, to which the latter explains that he is not making noise but singing a song.

When KJo expresses his desire to sing a song again, the twins ask him to refrain from singing. On being asked why they disapprove of his singing skills, Yash adorably replies, "I don't like it." Few minutes later, when the filmmaker starts singing Channa Mereya from his film Ae Dil Hai Mushkil, Yash and Roohi loudly boo him.

Karan then turns to mom Hiroo Johar for help, who keeps a straight face as she agrees with her grandchildren's opinion about the filmmaker's singing skills and tells him, "I think it's something that's given at birth. Even your father didn't have it. You were still better than your father."

The Takht director captioned the video as, "So ever since I can remember I have loved singing! Am so glad to know I have a loving audience .....#lockdownwiththejohars." (sic)

So ever since I can remember I have loved singing! Am so glad to know I have a loving audience .....#lockdownwiththejohars

Anushka Sharma pulled Karan Johar's leg and commented on his post, "Fans at home for you - Nil" (sic). Malaika Arora wrote, "@karanjohar ur jus refusing to listen. I have been sayin the same for years now." (sic) Preity Zinta posted a bunch of laughing face emojis whereas Sophie Choudry wrote, "they are the besttttt" (sic) along with laughing face emojis and hearts. 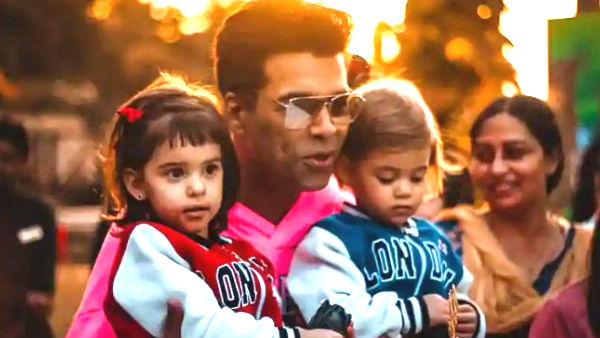