Sushant Singh Rajput's sudden death has left the nation shocked. The actor died by suicide in his Bandra apartment in Mumbai on June 14, 2020. Since then, various conspiracy theories about his tragic end have been doing the rounds on social media. Further, the passing away of Sushant has reignited a debate on topics of nepotism, lobbying and camp-ism in Bollywood. 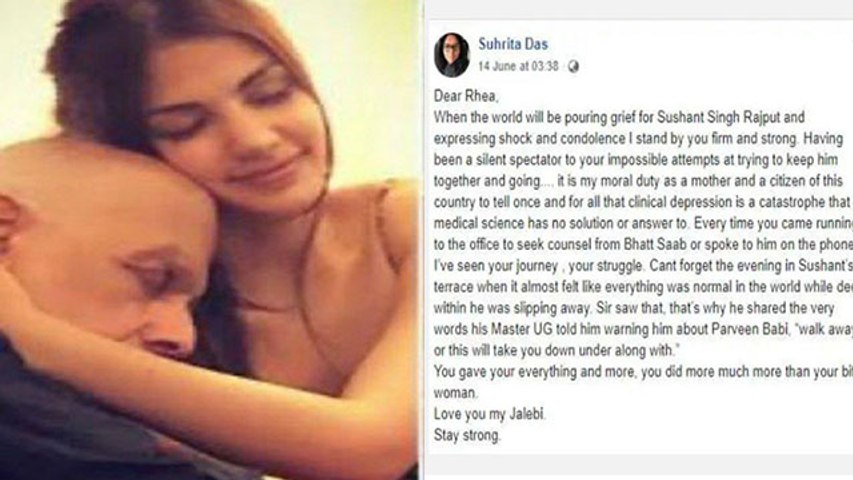 Meanwhile, the Mumbai Police is currently busy investigating Sushant's death case, and so far, they have recorded 27 people's statements in connection with this tragic loss.

Recently, one of Mahesh Bhatt's associate named Suhrita Das, made some shocking revelations about Sushant Singh Rajput and Rhea Chakraborty's relationship in a Facebook post. However, post backlash from Sushant's fans, she deleted her controversial post.

'I Stand By You Firm And Strong,' Says Mahesh Bhatt's Associate To Rhea Chakraborty

Suhrita began her post by writing, "Dear Rhea, When the world will be pouring grief for Sushant Singh Rajput and expressing shock and condolence I stand by you firm and strong. Having been a silent spectator to your impossible attempts at trying to keep him together and going.... it is my moral duty as a mother and a citizen of this country to tell once and for all that clinical depression is a catastrophe that medical science has no solution or answer to."

"Every time you came running to the office to seek counsel from Bhatt Saab or spoke to him on the phone I've seen your journey, your struggle. Cant forget the evening in Sushant's terrace when it almost felt like everything was normal in the world while deep within he was slipping away. Sir saw that, that's why he shared the very words his Master UG told him warning him about Parveen Babi, "walk away or this will take you down under along with."You gave your everything and more, you did more much more than your bit woman," she concluded her note.

Recently, netizens dug out some old pictures of Rhea Chakraborty with Mahesh Bhatt, and started trolling the Jalebi actress. Rhea has been facing backlash from Sushant's fans ever since he passed away. To keep away from all the negativity, she has disabled her comment section on her Instagram page.

Rhea Chakraborty Has Recorded Her Statement In Connection With Sushant's Demise

A few days ago, the actress was summoned by the Mumbai Police to record her statement, and her interrogation went on for about 9 hours. It was reported that Rhea's phone was also scanned, along with her pictures and videos with Sushant and the texts exchanged between them.