Recently, Milind Soman found himself on Twitter's trending list after he opened up about his stint with Rashtriya Swayamsevak Sangh (RSS) as a young boy. In his new memoir, Made in India, the model-actor-athlete spoke of going to the local 'shakha' at the Shivaji Park in Mumbai and his experience of being a 'desi scout'.

A report in The Print quoted his book, "When I read today all the subversive, communal propaganda the media attributes to RSS shakhas, I am frankly baffled. My memories of what happened at our shakha between 6 and 7 p.m. each weekday evening are completely different-we marched about in our khaki shorts, did some yoga, worked out in a traditional outdoor gymnasium with no fancy equipment, sang songs and chanted Sanskrit verses that we did not understand the meanings of, played games and had a bunch of fun with our fellows."

He further added, "Occasionally, we'd be taken on treks or overnight camping trips in the hills around Bombay, which we eagerly looked forward to and enjoyed very much. The whole thing was overseen by a team of mostly-well-meaning-if not always inspirational-adults, who truly believed they were helping raise good 'civilian soldiers'- boys respectful of authority, well-behaved in the presence of adults and well-aware of the importance of physical fitness- who would put their efforts into nation-building when they grew up. A desi Scouts movement, if you will. As for the parents who registered their kids, most saw the shakha as just another way to keep their offspring in good shape and out of trouble."

Milind Soman found himself trending on social media as soon as his revelations went viral on the internet. The actor had a hilarious reaction to it and tweeted, "Trending at 54 for an experience I had at the age of 10. 🤪🤪🤪🤪 wish it was about swimming, which was at the same time!"

Trending at 54 for an experience I had at the age of 10. 🤪🤪🤪🤪 wish it was about swimming, which was at the same time!

His wife Ankita Konabar, too joined in the fun and said that unlike her husband, who was a part of a 'serious' task at age 10, she was only 'chasing butterflies' then. Check out her tweet here.

Wow a childhood experience can really stir up some conversations 😆
I think I was chasing butterflies when I was 10. Anyone else? https://t.co/XgRdtAqug3

Earlier, Milind had shared an excerpt from his memoir on Instagram and written, "The year 1995 was a very significant year for me in many, many ways. In January that year, my father died, leaving me with a bunch of mixed feelings to sort through, but not much grief. I had never had a great deal of affection for him, which is rather sad when you come to think of it, because he cared deeply for me in his own way. When he had moved out of home five years before he died, I remember feeling nothing but a huge sense of relief; as I sat by his prone form in the ambulance that was taking him to the hospital, I tried to muster up some warm emotion for him, but did not succeed. It was the end of an important and not always happy chapter in my life; fortunately for me, I was able to make my peace with it sooner rather than later. Right on the heels of my father's passing came the music video. Yup, that video. The one that single-handedly propelled the singer-the pint-sized, sweet-faced, 'baby doll' Alisha Chinai-into the stratosphere of musical fame. And turned me from a supermodel into something way bigger-a star. (excerpt 'Made in India - a memoir ). Now for a haircut !!! @ankita_earthy." 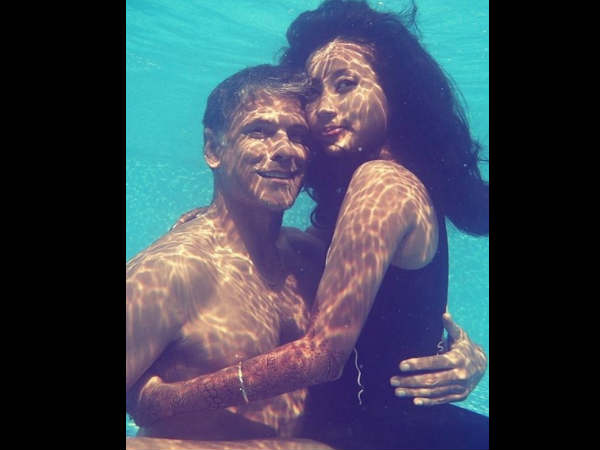 Milind Soman & Ankita Konwar Dive Deep In Love And Give A Glimpse Of Their Underwater Romance! 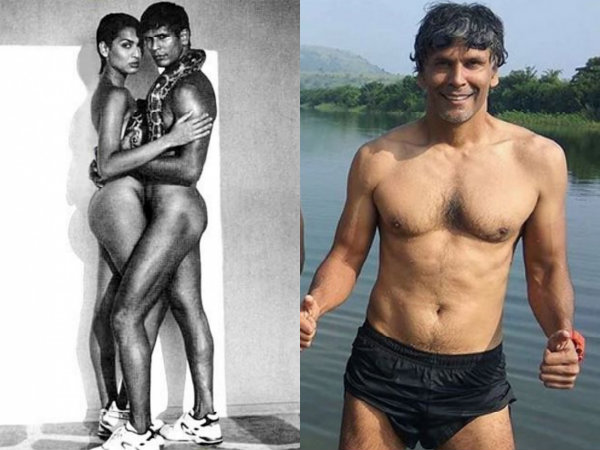 Milind Soman Is Ready To Do A Nude Photoshoot Even Today & The Ladies Have No Issue Towards It!