Priyanka Chopra shared an old track of her film, Karam, on her Instagram page and revealed that when the song 'Tinka Tinka' was released, many people thought that she sang the song. However, Priyanka revealed that it was Alisha Chinai, who had crooned the song and complimented PeeCee's tone so well.

Priyanka wrote, "Tinka Tinka is a song from one of my earlier films Karam (Deed). It released 2005. For those who might not know, Hindi films use playback singers for most actors and I've had the fortune to have some amazing singers lend their voice to my films over the years."

She further wrote, "But when this song was released, most thought it was me...But in fact it was the voice of one of my favorite singers @alishachinaiofficial... she complimented my tone so well. Thank you Alisha!! .. so this Thursday.... #TBT @sanjayfgupta @thejohnabraham."

Karam is a 2005 action thriller film, which marked the directorial debut of cinematographer Sanjay F. Gupta. Apart from Priyanka and John Abraham, the film also featured Shiney Ahuja in the lead role.

Cut to present, Priyanka is currently observing lockdown in the US, along with her hubby, Nick Jonas. Recently, the actress went on record, saying that she is working on her creative side and learning how to play piano from her talented husband. Apart from that, she's also brushing up on her dancing skills. 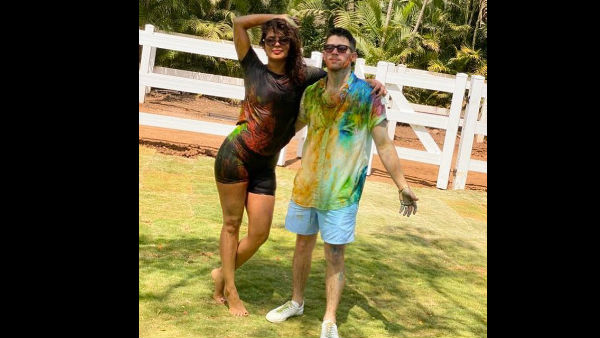 Coronavirus Scare: Why Did Priyanka Chopra Return To America Despite Sensing Lockdown In Advance?

With respect to work, she was last seen in The Sky Is Pink alongside Farhan Akhtar and Zaira Wasim. The film was a flop at the box office but, PeeCee received praises for her honest performance.

She will next be seen in the The White Tiger, opposite Rajkummar Rao.