The news of Sushant Singh Rajput's sudden demise has shattered the hearts of many people across the globe. It's yet to sink in that the Bollywood star is no longer with us. However, his memories continue to hold a special place in our hearts. 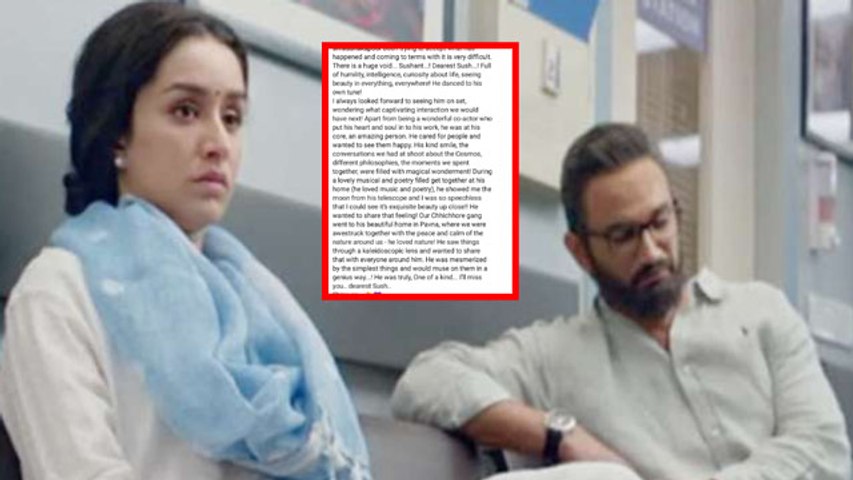 Bollywood actress Shraddha Kapoor is mourning the loss of her co-star Sushant in her own way. The two had shared screen space in Sushant's last release Chhichore.

The actress took to her Instagram story to share a bunch of memories with her late co-star. She posted a still from the Chhichhore song 'Fikar Not' and captioned it as, "There is the rare kind you meet; the one who makes YOU feel special, who makes YOU feel good about yourself, who showers YOU with kindness and love and HE was one of them."

The second still featured a throwback picture, in which Sushant and Shraddha are all smiles, and are seen posing for a photo-op at a fashion event.

The third picture in Shraddha Kapoor's Instagram story is a still from Chhichhore. In the snap, Sushant and Shraddha are seen sitting across a table.

In her touching note, the actress mentioned how she is finding it difficult to accept Sushant's demise, and come to terms with it. She recalled his qualities and remembered him as someone who danced to his own tunes. Shraddha also walked down the memory lane to share her wonderful memories of visiting his home in Pawna with the Chhichhore team, where they were "awestruck together with the peace and calm of the nature" around them.

Sushant Singh Rajput's last theatrical release was Nitesh Tiwari's Chhichhore. The film was one of the highest grossers of 2019.