As Sonam Kapoor celebrates her second wedding anniversary today (May, 8), the actress shared her first picture with hubby Anand Ahuja on her Instagram page. Apparently, the picture was clicked four years ago in London. The picture looks every bit goofy owing to Anand's pose and we can't just stop awing over their cuteness. Sonam also penned a mushy note along with the picture. Here's what she wrote..

"Our first picture together.. 4 years ago today I met a vegan who could do complicated yoga positions and speak about retail and business with the same ease. I found him unbelievably cool and sexy., he still makes my heart race and grounds me at the same time. Nothing compares to you @anandahuja, your compassion, kindness, generosity and smarts are incredibly attractive but so is your moodiness and your annoying perfectionism," wrote the Neerja actress.

She further added, "Thank you for being my partner and standing beside me for these 4 years. They have been my most fulfilling. Happy happy anniversary husband. I'm soo thrilled I get to keep you for the rest of my life. I love you the most and I know you love me the best and the most. That I promise you is the greatest gift I've ever received. ❤ #everydayphenomenal." 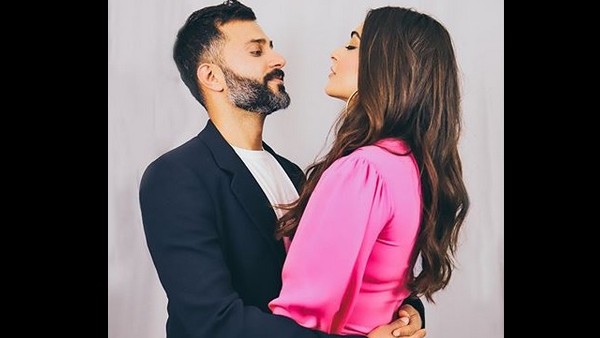 Anand, who's madly in love with Sonam, replied to her post and wrote, "Just getting started my 🐰! Can't get enough of you! 😍❤ #EverydayPhenomenal."