Late actor Sushant Singh Rajput shared a close bond with his sister Shweta Singh Kirti. The latter has been struggling to cope up with her actor-brother's sudden demise. After more than a month post Sushant's demise, Shweta recently shared a part of conversation that she had with him, four days before he passed away in Mumbai.

Shweta also shared some sweet memories from their childhood days along with a couple of Sushant's unseen pictures. 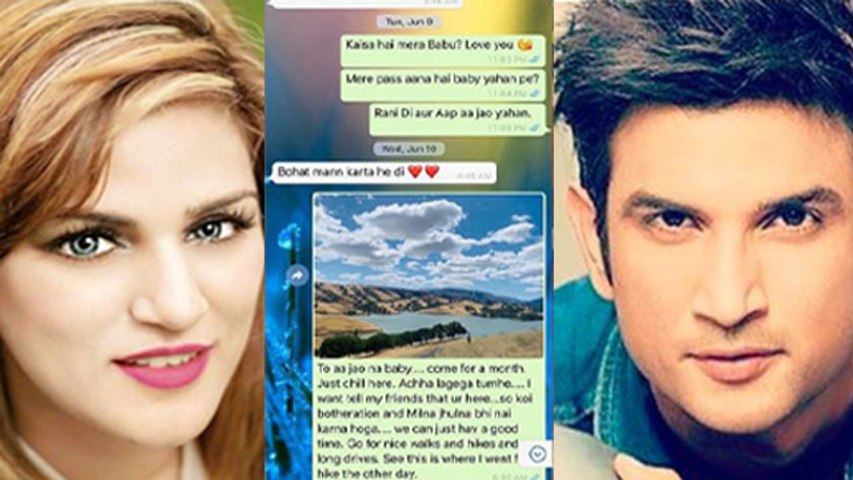 In the screenshot of a WhatsApp conversation shared by Shweta, Sushant responds to his sister's request of coming to their place in the US. He tells her, "Bohat mann karta he di (I really feel like...)" to which she replied with a photo of a picturesque location and wrote, "To aa jao na Baby...come for a month. Just chill here. Achha lagega tumhe...I want tel my friends that ur here...so koi... (So please come baby, come for a month. Just chill here, you will feel good. I will tell my friends you are here so nobody...)."

"I am experiencing bouts of pain. Right when I think I am coping with it better, some or the other incidence rushes right back into my memory and breaks me apart. One such memory I am sharing with you all... because it is said that the more you share your grief, the less it hurts," she wrote on her Instagram page.

Sushant's Sister Reveals The Story Of His Birth

She wrote in her post, "I have always been told by my family members that Mom and Dad wanted a son, more so because Mumma's first child was a son and she had lost him at the tender age of one and half. I never got to meet my first sibling. But mom and dad were very hopeful for a second son.... they made a sankalp (mannat) and started praying to Maa Bhagwati for straight 2 years. They fasted, they meditated, they did puja, hawan and went to spiritual places and met spiritual people. But then I was born, on a Diwali day.... Mumma considered me very lucky and often called me Lakshmi Ji. They continued with their Sadhna, and a year later my little brother was born. Right from the beginning he was a charmer, he mesmerized everyone with his beautiful smile and twinkling eyes."

She further revealed that she and Sushant were lovingly called Gudia Gulshan as "they always played, danced, studied, did all sorts of mischiefs, ate, slept, did everything together so much so that people forgot we were 2 separate individuals."

Shweta recalled that Sushant used to call her "Pithiya" because her mother believed that she was the cause of Sushant's much-desired arrival into their lives. Shweta further said, " I was very protective about my little brother because I felt I was responsible for bringing him to this earthly plane."

When Little Sushant Came To Meet His Sister In His Classroom

Sharing a few childhood memories, Shweta recalled that her little brother once travelled "half-a-kilometer" as a 4/5 year old kid to meet her in her classroom as he was feeling alone and anxious and wanted to be with her. She narrated another incident from her first day at school when she sneaked him into her classroom and tried to hide him between her and her friend.

Shweta Also Shared A Memory From Her Vidaai Ceremony

She wrote, "Fast forward in 2007, I remember the day when I got married and as I was leaving, Bhai hugged me tight and we cried a lot. Physically we won't stay together anymore, we won't get to see each other that often anymore as I was moving to USA."

"Both of us got too busy with our lives. Bhai got into Bollywood and kept making us all proud with his accomplishments but I remained protective about him. I would often ask him to come and visit me in the US so that we can relive our childhood once again away from all the noise. I only wish I could have protected him from everything....I still wish I will wake up to see my Bhai... just right next to me and will realize this whole episode was just a nightmare and nothing more. #BhaikikahaniBehankizabani #Downthememorylane #LuvuBhai," Shweta wrote on her Instagram page.

ALSO READ: Rhea Chakraborty's Brother Pays A Moving Tribute To 'Bhai' Sushant: You Were A Catalyst In My Life