In a recent interview, veteran actor Naseeruddin Shah called fellow actor Anupam Kher, "a sycophant and a clown and someone who shouldn't be taken seriously," with reference to Kher's political opinions and his stance on the Citizenship (Amendment) Act. Kher has not taken this well, and has released a video message, hitting back at Naseeruddin with scathing remarks.

Sharing a video on Twitter, Anupam Kher wrote, "My message of love to Janab Naseeruddin Shah. He's more experienced and older than me and I have always respected and will always respect his art. But sometimes it's necessary to address some issues head on. This is my answer," (sic).

In the video, Anupam Kher says, "Janab Naseeruddin Shah Sahab, I watched the interview you gave about me. You said that I am clown, and should not be taken seriously; that I am a sycophant and that all of it is in my blood. Thanks for these compliments, but I don't take what you said seriously at all. However, I never bad-mouthed you, or said anything rude to you. But now I would like to say that you have spent your entire life, despite all the success, in frustration."

He continues, "If you can criticise Dilip Kumar, Amitabh Bachchan, Rajesh Khanna, Shah Rukh Khan, and Virat Kohli, then I am sure I am in great company. Also, none of these people took your statements seriously. Because we know that this is not you talking but all the substances you've consumed for years. They've clouded your judgement of what is right and what is wrong. If saying bad things about me gets you headlines for a couple of days, then this is my gift to you."

"May God keep you happy, your well wisher, Anupam. And do you know what's in my blood? Hindustan. Just understand this. Jai ho," he signs off.

In Naseeruddin Shah's interview with The Wire, he had been critical of Anupam Kher for his political stance, which often comes off as compliant to the ruling party. Saying that Kher has been vocal of his unquestioning support for the central government, he dismissed him as a clown who cannot be taken seriously. He even said that many of Kher's contemporaries from the National School of Drama and the Film and Television Insitute of India can attest to his sycophantic nature, which is in his blood.

On the other hand, Naseeruddin Shah was all praise for actress Deepika Padukone for showing solidarity with Jawaharlal Nehru University students and teachers after the violent attack by a masked mob in the premises. 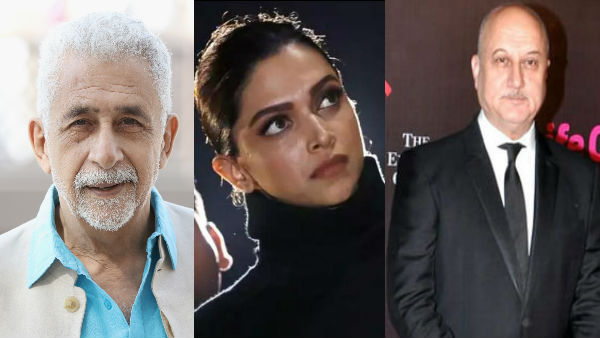