Actress Kangana Ranaut who is gearing up for the release of upcoming film Panga, is celebrating Hindi Diwas, today in an unusual way. The actress has decided to take panga with the English language. She also claimed the Bollywood industry has always fun of her for not knowing the English language well, but 'I have always kept Hindi as my priority'.

Kanaga's sister Rangoli Chandel took to her social media and shared the Hindi Diwas celebratory video. In the clip, Kangana can be seen urging everyone to give Hindi language more importance than English, since it is our national language. On the contrary, India does not have a national language but, does have 22 official languages including Hindi.

She spoke in Hindi, "Today on Hindi Diwas, let's take Panga with English but with love. Hindi is our national language but the nation worries speaking it... 'A, B, C' comes out with confidence but 'ka, kha, ga' doesn't come out with that much confidence... Parents also say with full pride that their children speak amazing English..."

She further added, "If you are weak in English, then you feel ashamed but if your Hindi is weak then there is not even wrinkle of worry on the forehead... Bhasha becomes the password of social circle and sometimes, it becomes the certificate of your talent.

"The film world has always made fun of my English...and criticised it. But still, I've kept Hindi language as my priority for which I could expand my reach and achieve major success," Then then went on to urge all mothers to make sure children are taught the love for Hindi as they are forced to learn English.

Kangana Ranaut's next film, Panga, is a story of a mother who wishes to get back into the game and pursue her dream of being kabbadi player. Directed by Ashwiny Iyer Tiwari, it also stars Richa Chadha, Jassie Gill and Neena Gupta. The film is scheduled to release on January 24, and it also features 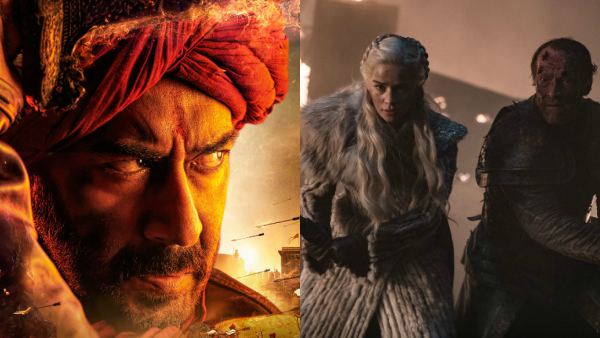 This Fan Compares Tanhaji: The Unsung Warrior's Battle With Battle Of Winterfell In Game Of Thrones