Bobby Deol, who was last seen in Farhad Samji's comic caper Housefull 4, has turned a year older today. Yes, the good-looking actor is now all of 51 but he seems to be aging like an old wine. Currently, he is in New York spending some quality time with his family on his special day.

While a lot of industry friends have been wishing him on social media since morning, his Housefull 4 co-star and good friend Riteish Deshmukh did something rather special for the birthday boy. Riteish, who is busy shooting for his upcoming film Baaghi 3, made sure to wish Bobby from the sets of his film along with choreographer-turned-filmmaker Ahmed Khan.

Unlike posting a message, Riteish made a TikTok video wherein he is seen dancing to Bobby's hit song Teri Adao Pe Marta Hoon. Along with him, Ahmed Khan is also seen shaking a leg and wishing Bobby a very happy birthday. The Ek Villain actor shared the hilarious TikTok video on Twitter and wrote, "From the sets of #Baaghi3 - Happy Birthday Bobby @thedeol - @khan_ahmedasas grooving with yours truly."

From the sets of #Baaghi3 - Happy Birthday Bobby @thedeol - @khan_ahmedasas grooving with yours truly. pic.twitter.com/tnxWdAeIho

Well, looking at the video, all we can say is that Riteish definitely knows how to make someone's birthday special and make them laugh too. Coming to the professional front, Riteish's last film Marjaavaan turned out to be a big dud and hence the expectations are high from his next offering Baaghi 3 which also stars Tiger Shroff in the lead along with Shraddha Kapoor.

As for Bobby, the actor will next be seen in the Netflix original film Class of '83 alongside Shriya Saran, Priyanshu Chatterjee, Amrita Puri, and Anup Soni. The movie is being directed by Atul Sabharwal under Shah Rukh Khan's production banner Red Chillies Entertainment. The gripping cop-drama went on floors in the first week of May last year and is expected to release in the first half of 2020. 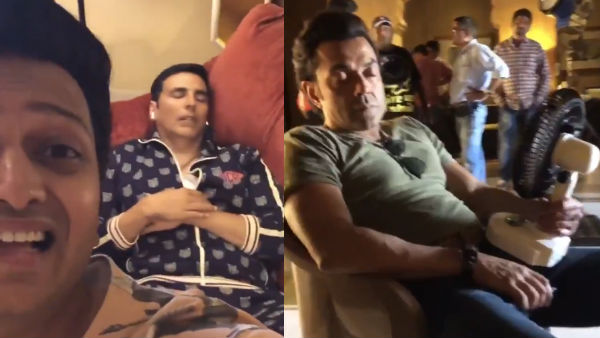