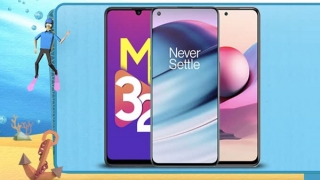 The Amazon Prime Day sale is now live and here we have listed the top 10 treading smartphones available for purchase during the sale. Check out the offers before making a buying decision.
View Sample
For Quick Alerts
ALLOW NOTIFICATIONS
For Daily Alerts
Videos

Arbaaz Khan and Malaika Arora ended their 19-year long marriage in 2017. Post their divorce, Arbaaz entered into a relationship with model Giorgia Andriani while Malaika is dating Arjun Kapoor. It's been four years since the couple called it quits, but Arbaaz and Malaika continue to be at the receiving end of trolls.

Recently in an interview with Bollywood Bubble, Arbaaz opened up on getting trolled post his separation from Malaika. He said that while they weren't really affected by the negativity, he believes that a lot of it was unfair. The Daraar actor said that he has accepted a certain situation and moved on from it.

Arbaaz told the entertainment portal, "It's a futile exercise that they do. Do you really think that the more you say something things are going to change? In my personal life, I've already gone through that upheaval, and gone through that scenario where I felt what I had to feel. I have accepted a certain situation and moved on from it. We don't live near-perfect lives. We all are fallible, we make mistakes."

Further citing example of Bollywood superstar Aamir Khan who recently got divorced from Kiran Rao, the actor said that such things happen when fans like a certain couple and like to see them together.

"Maybe the fans and followers, if they like a certain couple, they'd like to see them together. And it's happened recently with somebody like Aamir, for that matter. It happens. But that does not mean we're bad people. They're just two people who've realised that the reason they were together was to make... The journey had to be wonderful and beautiful together. Sometimes you have different paths, you grow to be different people. You have to let them grow and be happy. So we never got affected," Arbaaz told Bollywood Bubble.

Arbaaz Khan: I Have Never Kept Tabs On Malaika, Landed Up On Her Sets Or Kept Calling Her Insanely [Throwback]

The Pyaar Kiya Toh Darna Kya actor revealed that though he never got affected by comments on his personal life, he feels that they were all unnecessary.

Arbaaz continued, "I never got affected by comments on my personal life, particularly on my relationship. Of course, I feel they were all unnecessary at time, quite a few of them, but one had to ignore it and move on." The actor further said he has no reason to answer to anyone, and that there is nothing to explain.

Workwise, Arbaaz Khan was last seen in Salman Khan's Dabangg 3. He has now returned with the second season of his celebrity talk show Pinch.