Taapsee Pannu has never shied away from stepping out of her comfort zone and taking up roles which challenge her as an actress. Her upcoming film Haseen Dillruba has generated a lot of curiosity as it features the Thappad star in a never seen before avatar.

But do you folks know that Taapsee wasn't not the first choice to play the character of Rani Kashyap in this film? Yes, you heard that right. Recently in a chat with Navbharat Times, the actress revealed that she was approached for this film after the makers exhausted all their options.

"The day Kanika Dhillon told me about the basic concept of Haseen Dilruba, I liked it a lot. Unfortunately, I was not the first choice for the film. It eventually came to me, after they exhausted all their options," Taapsee told the tabloid.

Going by the audience's reaction to the recently released trailer of Haseen Dillruba, we can safely bet that the makers have made the right choice by casting Taapsee in this film which is touted to be a tribute to pulp fiction.

Earlier while speaking with IANS, Taapsee had expressed her excitement on being a part of this murder mystery and said, "It's not just a beautifully written mystery, it has such wonderful characters involved which is like candy in an actor's hands. I am glad I got to experiment with my look with this one. I am definitely not the go-to person for this kind of character conventionally and we all love to take risks here." 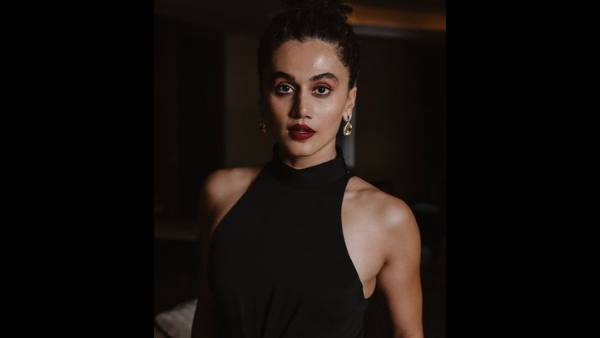 Taapsee Pannu Shuts Down Troll Calling Her 'Sasti'; Says 'Don't Crowd My Timeline With Your Nonsense'

Haseen Dillruba features Taapsee Pannu as a small-town housewife who ends up as a prime suspect in her husband's gruesome death. Under investigation, she reveals shocking details of their thorny marriage which only seem to further blur the truth.

Directed by Vinil Mathew and produced by Aanand L Rai, Haseen Dillruba also stars Vikrant Massey and Harshvardhan Rane in key roles. The film is slated to premiere on July 2 on Netflix.