Bollywood actress Sonam Kapoor and Anand Ahuja welcomed their first child on August 20. The couple, on the occasion of their son completing one month, took to social media to announce his name. Although they haven't revealed the child's face yet, the Kapoor and Ahuja family keep sharing adorable glimpses of Vayu online. One of the latest has been shared by his granddad, Anil Kapoor.

The veteran actor on Tuesday shared a heartfelt birthday wish for his mother, Nirmal Kapoor. He posted a slew of photos featuring his family members and wrote, "The wonderful daughter, wife, mother, grandmother & now great grandmother celebrates her 88th birthday today! There's no one like you! Happy Birthday Mom! @nirmalkapoorbombay." Take a look here 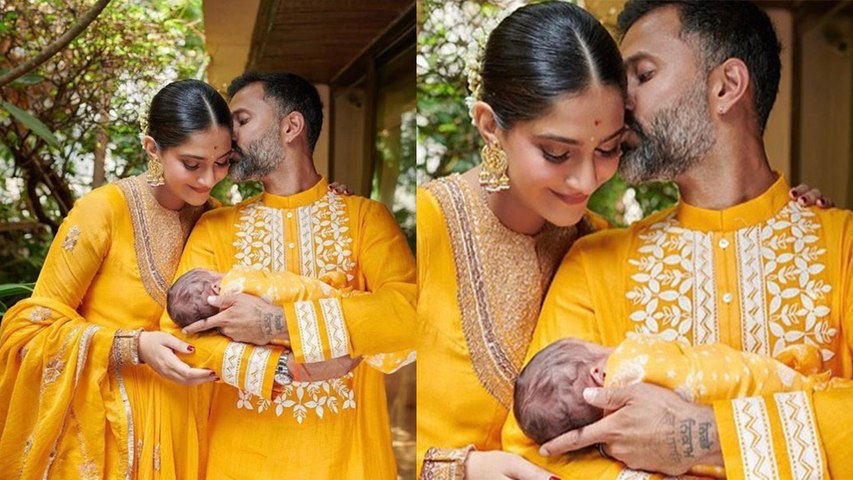 The first photo appears to be from Vayu's first month birthday celebration, which also has Sonam, Anand, and their parents. Little Vayu can be seen in his mom's arms. They all looked extremely beautiful in an all-yellow traditional ensemble, with Sonam wearing an anarkali suit, while Anand kept it simple with a yellow-coloured kurta pyjama. On the other hand, little Vayu, too, coordinated with his parents in yellow ethnic wear for a puja function.

Sonam also took to her Instagram account to send wishes to her grandmother, Nirmal Kapoor. In the throwback post, one image shows Vayu curled up in his great grandmother's arms, which had his face blurred. In another photo, little Sonam is posing with her grandmother, Nirmal. "Happy happy birthday dadi love you@nirmalkapoorbombay," wrote the actor. Check out the post here

Last week, Sonam took to her Instagram account to reveal her son's name. Sharing an adorable photo alongside the post, she highlighted the thought behind the name of her child. Her post read, "In the spirit of the force that has breathed new meaning into our lives... In the spirit of Hanuman and Bheem who embody immense courage and strength... In the spirit of all that is sacred, life-giving and eternally ours, we seek blessings for our son, Vayu Kapoor Ahuja."

Speaking on the work front, Sonam was last seen in The Zoya Factor with Dulquer Salmaan. Her next appearance will be in Sujoy Ghosh's production Blind.